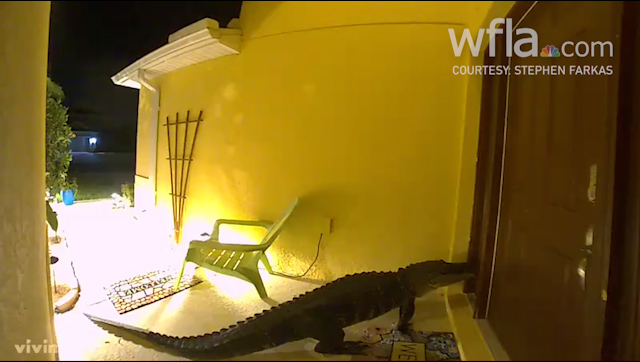 TAMPA, Fla. (WFLA) – Besides being known for its â€œFlorida Manâ€ headlines, the Sunshine State is also great for animal stories.

From wild alligators that often knock on doors to rescued animals at the various aquariums and facilities in Tampa Bay, it is certainly wild out there!

We’ve compiled a list of eight awesome animal stories from 2021 that feature alligators, rescues, and more.

Did we miss your favorite Florida animal story or video from this year? Let us know by sending an email to [email protected]!

A uniquely pigmented young bottlenose dolphin was spotted in the Gulf of Mexico in April and has been monitored by the Clearwater Marine Aquarium.

While many called the baby â€œalbino,â€ those at the CMA did not refer to the animal as such without further photographic research. CMA monitors all dolphins in their area as part of its â€œDorsal Fin IDâ€ program.

The pale dolphin has been identified as a calf nicknamed “Cherub” which was less than a year old at the time, the third known calf of a dolphin called “Guardian” which has been studied by the aquarium since 2015.

The young dolphin is missing a fin and the aquarium described the calf as “hypopigmented” because it has some coloration and its eye color is normal, not red, a common sign of albinism.

The widely traveled manatee “Chessie” was released back into the wild in May and is being tracked by researchers at the Clearwater Marine Aquarium Research Institute.

Chessie has been spotted as far north as Rhode Island, first seen in Chesapeake Bay in 1994, a very unusual location for a manatee. The male manatee is estimated to be around 35 years old and has a scar pattern that sets him apart from other manatees.

The mammal had undergone previous rescues, but was rescued again during the 2020-2021 cold snap in what is known as an “unusual mortality event” (or “UME”) on Florida’s east coast. . He was found emaciated and swimming on his side, in need of rescue.

He was released in May north of Palm Beach.

Chessie’s whereabouts can be followed by the general public by visiting the CMA website online.

Certain shark species and their locations could indicate whether tropical weather is about to strike in your area, according to new research that supports previous research conducted by the Mote Marine Laboratory.

Mote’s research from the summer of 2001 used a series of underwater receivers that tracked the positions of 41 juvenile black tip sharks equipped with transmitters before Tropical Storm Gabrielle in a nursery area in Bay of Terra Ceia. Dr Bob Hueter, a retired shark researcher at Mote Marine Laboratory and current OSEARCH employee, was involved.

“We were able to follow them as they reacted to the hurricane before it even got here – as they left, then came out of the hurricane outside and then came back,” Dr Hueter said. about research.

He said sharks in shallow environments, such as the lower Tampa Bay, tend to move to deeper water when a storm is brewing.

A doorbell camera captured a scaly nocturnal visitor on his way to a house in Parrish in June.

Steve Farkas said around 4:30 a.m. an alligator approached his front door and lingered for a while. The alligator then left and headed for the side yard but quickly returned, once again approaching Farkas’ front door.

â€œEveryone has a habit of opening their front door garage and letting their dogs out, so now we’ve actually posted on our community Facebook page just to let people know,â€ he said. declared.

According to the Florida Fish and Wildlife Conservation Commission, alligators typically become more active in the spring and summer as the heat speeds up their metabolism and causes them to forage for food.

The Tampa Bay Lightning won the Stanley Cup for the second year in a row in 2021, and another Tampa staple hosted another Stanley that same night.

Stanley the Giraffe was born to Angel, first-time mom, in Busch Gardens. He spent time bonding with her behind the scenes before the couple set off to join the herd on the theme park’s 65-acre Serengeti Plain.

A seahorse that was rescued by a Good Samaritan and brought to the Clearwater Marine Aquarium gave birth to a plethora of babies in late July.

The male seahorse was found floating in the waves and a veterinarian confirmed the animal had “an over-inflated swim bladder and released trapped air,” according to the aquarium.

A few days later, under the observation of veterinarians, the hippocampus gave birth … by the hundreds!

The father and his babies were monitored by staff, although the father continued to have problems with buoyancy which would affect his ability to survive in the wild and would be listed as “not releasable” by the Florida Fish. and Wildlife Conservation Commission.

The family of orangutans and the rhinos of ZooTampa were treated to an enrichment in classical music during the summer.

Classical pianist Cesar Maeda treated animals to his tunes. Orangutan “Goyang” even received a late “happy birthday” with the help of guests, according to the zoo.

Joe Brenner was out with his 2-year-old son when the toddler spotted what he thought was a “turtle”. It turned out to be an alligator in a sewer outside a Jacksonville restaurant.

In a video shared with WFLA, Brenner in the video says, â€œYo, check this out in the sewers outside Cantina. There is a gigantic alligator and it’s alive like hell. Her son can also be heard saying, â€œHello Mr. Alligator! “

â€œMy 2-year-old son looked in the sewers outside the restaurant and said ‘turtle’ – not quite,â€ Brenner told the WFLA.