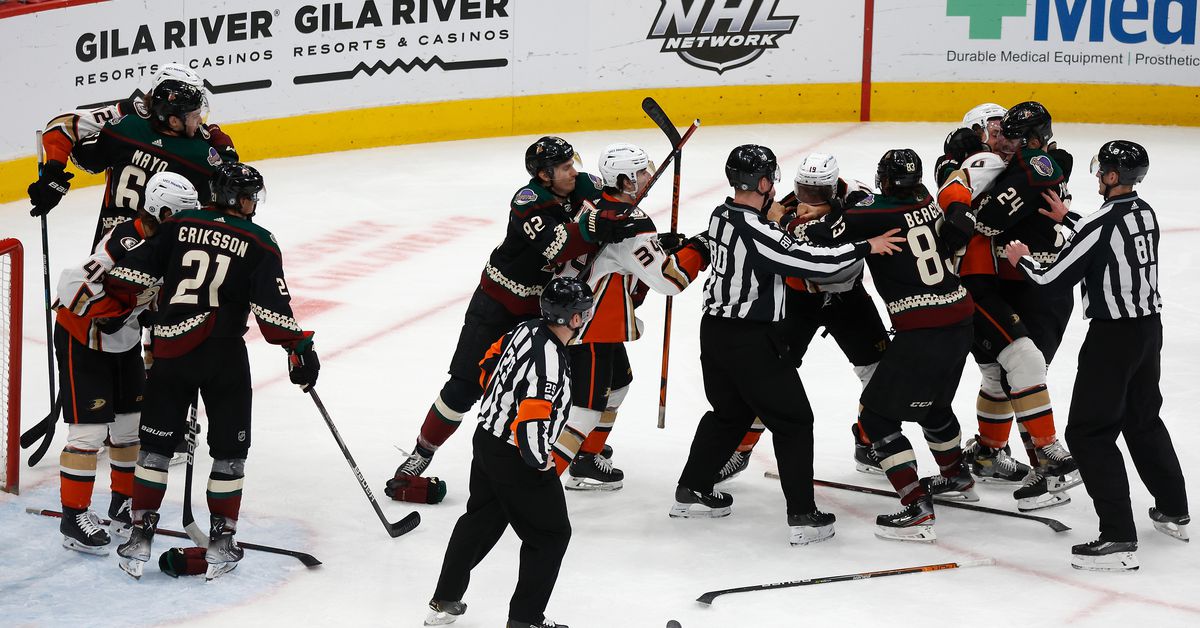 Losing Clayton Keller for the rest of the season was always going to be a big hurdle for the Arizona Coyotes. Keller is one of the Coyotes’ best players, and his absence was felt in the team’s 5-0 loss to the Anaheim Ducks.

A lack of Keller wasn’t the reason the Coyotes struggled last night. Anaheim was able to take it early, with Isac Lundestrom, Gerry Mayhew and Trevor Zegras all lighting the lamp within the first ten minutes.

Arizona had to rely on its goaltenders throughout the season. Karel Vejmelka has won a few games for the Desert Dogs, but he looked like a miss in his seventh consecutive start.

Goals from Lundestrom and Mayhew were relatively soft, and Karel Vejmelka was definitely kicking himself after allowing them. Trevor Zegras had another lacrosse-style goal and Coach Tourigny mercifully had Vejmelka.

Josef Kořenář was in net for the rest of the game, but the Coyotes were in a deep hole.

The second period began with 4-on-4 action with Dominik Simon and Nick Richie both in the box for rough calls. Like many lopsided matches, things were going to get physical.

The second period saw a flurry of penalties which started with Phil Kessel headed to the box for cutting. Eight seconds later, Sonny Milano was sent off for a high stick, and we had more 4-on-4 action.

Anaheim took advantage of the 4-on-4 and Cam Fowler notched his eighth of the season when he shot past Kořenář on a 3-on-1.

Any chance of a comeback was cut short when Kyle Capobianco took a very sticky minor on the next face-off. The Ducks didn’t score on the 4-on-3, but the game slipped.

Tensions boiled over in the third period. First, Lundestrom brought his team back to the board with his second of the night to give the Ducks a 5-0 lead. Anaheim had lost their last 11 games, but they weren’t playing like this last night.

Midway through the last frame, we had our first official fight of the game, with Michael Carcone dropping the gloves against Sam Carrick. Carrick was rated a minor extra for roughing, and the Coyotes got their first power play of the game, not that it would make much of a difference.

It was only a precursor to another dust. Jay Beagle held off an extra hit from Trevor Zegras after the whistle and gave him a cross check in the blue paint. Cam Fowler didn’t like the shot, and a scuffle ensued. Somehow, Troy Terry found himself paired up with Jay Beagle, who handed him over to the Ducks’ leading scorer.

The end result was that Beagle received penalties for cross-checking, fighting and being game-fouled. Kessel was furious on the bench and picked up a misconduct penalty. Troy Terry had Anaheim’s only penalty, after being given two minutes for roughing it.

It was to forget for the Desert Dogs. They fell behind early and couldn’t catch up. With so many injuries to key players, the Coyotes will need someone to step in in a way they didn’t last night.

The Coyotes are back on the road and face the Chicago Blackhawks on Sunday at 4 p.m. Arizona time.