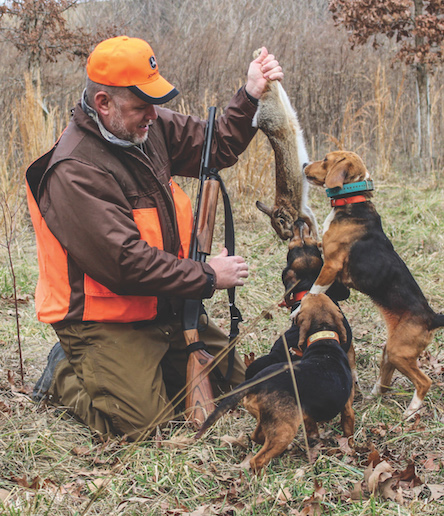 For many Kentucky residents, a trip in search of rabbits is one of the first species hunted when they were young. Rabbits are fun to hunt, especially with a pack of beagles, and are great when fried, baked or broiled.

The report is divided into two management areas:

Fluctuations in Kentucky’s rabbit population are tracked by the Rural Mail Carrier Survey and the Hunter Cooperator Logs.

For over 60 years, the Rural Mail Carrier Survey has been used to forecast prospects for the next hunting season, monitor the population and estimate rabbit productivity.

Letter carriers record sightings of rabbits as they travel their rural delivery routes during the last full week of July (6 delivery days). The survey maps provide space for rabbit observations for each of the survey days, the length of the route and the total number of kilometers traveled.

The most significant data derived from the survey are rabbits seen per 100 miles.

According to the Kentucky Rabbit Report 2021-2022, the Central Kentucky and Eastern Kentucky regions saw an 8 percent increase in rabbit sightings in 2022, while the Bluegrass region saw a 20 percent decrease. %. 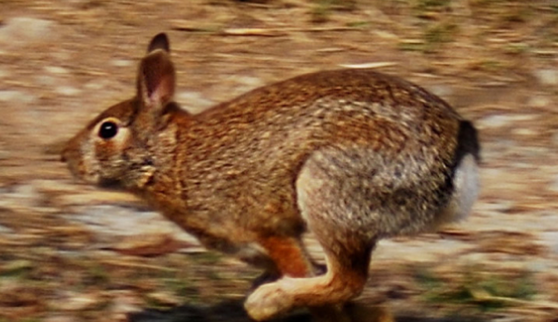 The Hunter Cooperator Log began in 1995. It is a voluntary program in which hunters are asked to log data including date of hunt, county hunted, hours hunted, number of hunters, the number of dogs, and the number of eastern, swamp, and Appalachian rabbits. (seen, killed and wounded), on a log-type hunting log.

Hunters update the log as the hunting season progresses and send it to KDFWR when they are done hunting for the season. Data collected from logs helps biologists monitor rabbit population trends in Kentucky.

According to the 2021-2022 Kentucky Rabbit Report, cooperative hunters last season made 645 trips to 42 counties. They hunted 2,264 hours, jumped 3,881 rabbits, and harvested 1,585 rabbits, including 1,573 cottontail rabbits. The hunting effort peaked in late December.

Art Lander Jr. is outdoor editor for the Northern Kentucky Tribune. He is a native Kentuckian, a graduate of Western Kentucky University, and a hunter, fisherman, gardener, and nature enthusiast. He has worked as a newspaper columnist, magazine reporter, and author and is a former editor of Kentucky Afield Magazine, editor of the annual Kentucky Hunting & Trapping Guide and Kentucky Spring Hunting Guide, and co-editor of the Kentucky Newspaper Column Afield Outdoors.

The outlook for the rabbit season is optimistic.

“I think the season will be similar to last season, but could be better,” said Cody Rhoden, small game program coordinator for the Kentucky Department of Fish and Wildlife Resources (KDFWR).

Anecdotal evidence suggests that reproduction and survival of young rabbits has been good this spring. In late summer, more cover was available for rabbits in the fields, as late cuts of hay were not economically feasible for farmers due to drought conditions.

Overall, rabbit numbers have declined since the late 1960s. This is attributed to habitat loss due to land use changes and cleaner farming practices used to grow small grains – corn, soybeans and winter wheat.

According to an article posted on the Kentucky Small Grain Growers Association website, Kentucky farmers expect to harvest 32.8 million bushels of winter wheat in 2022 from about 400,000 acres of grain fields.

Three species of rabbits in Kentucky

Kentucky has three species of rabbits, but only the eastern cottontail rabbit is found statewide.

Populations of Swamp Rabbits and Appalachian Rabbits are much smaller and found only in the region. 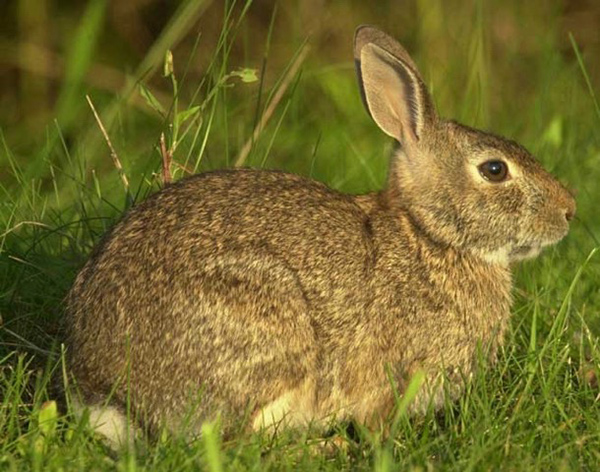 Historically, the highest populations were in the Knobs/Outer Bluegrass region and the Eastern Coal Basins. This is because the number of rabbits is linked to the early stages of plant succession, which includes areas where timber has been harvested or where the soil has been disturbed by agriculture.

Adults weigh two to four pounds and are brownish gray in color with black and white hairs.

• The Swamp Rabbit, Sylvilagus aquaticus, is the largest of the three species and is found in western Kentucky, associated with river bottom wetlands and islands in the lower reaches of Ohio and Mississippi.

Swamp rabbit numbers have declined due to habitat loss. There are isolated pockets with higher numbers, but this bunny is by no means plentiful. Populations tend to fluctuate greatly from year to year.

River bottom hardwoods, which flood periodically, and rushes are preferred habitats. Swamp rabbits have been found as far east as the lower Green River, but are more common in the purchase area. 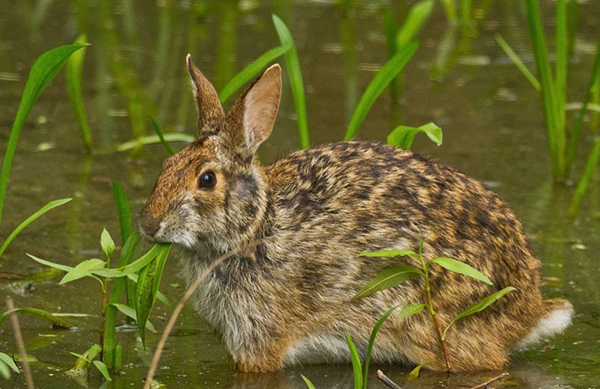 Swampers have a home range of 11 to 27 acres. They are at home in the water, with straps between their toes to help them swim and walk through mud. They are known to hide underwater with only their nose above the surface.

Adults can weigh up to six pounds, and the distinctive coloring includes rust-colored feet and a black patch between the ears.

Swamp rabbits run in zigzags and can reach an incredible speed of 48 miles per hour.

• The Appalachian rabbit, Sylvilagus obscurus, lives in the same habitat as the ruffed grouse.

It is strictly a forest species, but is often found around abandoned hill farms or strip mines.

Very similar in coloration to the eastern cottontail, the Appalachian cottontail is the smallest of the three species. It can only be differentiated from the eastern rabbit by details on its skull. It was only described in the scientific literature as a separate species in 1992.

This rabbit has been found in some counties on the Cumberland Plateau, as far west as Lincoln and Boyle counties, but little is known of its distribution in eastern Kentucky.

Like the ruffed grouse, numbers of Appalachian cottontails have declined because forests in eastern Kentucky’s highland counties are maturing, with less open land in shrubs, undergrowth, and young trees. .

The Appalachian rabbit is found at high elevations from Pennsylvania to South Carolina and is closely related to the New England rabbit, Sylvilagus transitionalis.

For more detailed information on rabbit season in Kentucky, visit the KDFWR Small Game and Furbearer Hunting and Trapping website.

For many Kentuckians who grew up hunting rabbits, the month between Thanksgiving and Christmas is the perfect time for a trip abroad. Exit and start over. Bring a friend or family member and relive your Kentucky small game hunting heritage.