Baylor College of Medicine: Hellhole for Animals in Labs 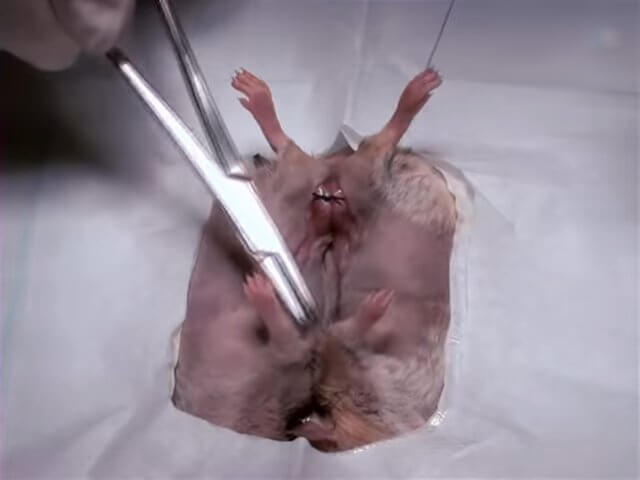 Gruesome horrors have accumulated in the labs of Baylor College of Medicine (BCM), where unskilled bumblebees go through experimental procedures and where callousness and indifference to animal suffering reigns. Baby mice limped in pain after experimenters cut off their toes without giving them pain medication. The experimenters surgically made conjoined twins sharing a single circulatory system by cutting and sewing pairs of mice. Blood was drained from an artery behind a mouse’s eye, and the experimenters then removed the eye, all without anesthesia.

PETA is also demanding that the BCM brass — in our second complaint since September 2019 — end the school horror show by holding experimenters accountable for the pain and suffering they cause and banning them from performing. access to animals.

Federal reports show that BCM experimenters failed to provide adequate pain relief to more than 500 animals on 18 occasions. The animals included the following:

Federal reports show that BCM experimenters conducted horrific, unapproved procedures, in violation of federal regulations, so often that it seems like “going rogue” is common practice at school. For example:

Log of experiences viewed: The cruel procedure depicted in this photo, in which two mice are surgically joined so they share a bloodstream, was performed at the University of California, Los Angeles. The mice that endured this nightmare had little or no control over their movements and likely experienced fear and anxiety as a result. A similar procedure was performed on mice at Baylor.

BCM staff cannot even be trusted to feed and water the animals. Federal records show a mouse died after being left without food or water after skull surgery. Here are some other examples of BCM incompetence:

BCM raised over $351 million in taxpayer money last year. About half of this sum covers animal experimentation that the school is clearly unable or unwilling to carry out in accordance with basic minimum animal welfare regulations and guidelines. Its morally bankrupt practices cause grotesque and almost unimaginable suffering to animals. It’s time for BCM to exit the animal torture business and embark on improving human health by embracing non-animal and human-relevant research methods.

what you can do

Join thousands of PETA supporters who have already called on Congress to stop wasting taxpayer dollars on cruel and unnecessary animal experiments and instead focus on modern, non-animal research methods.