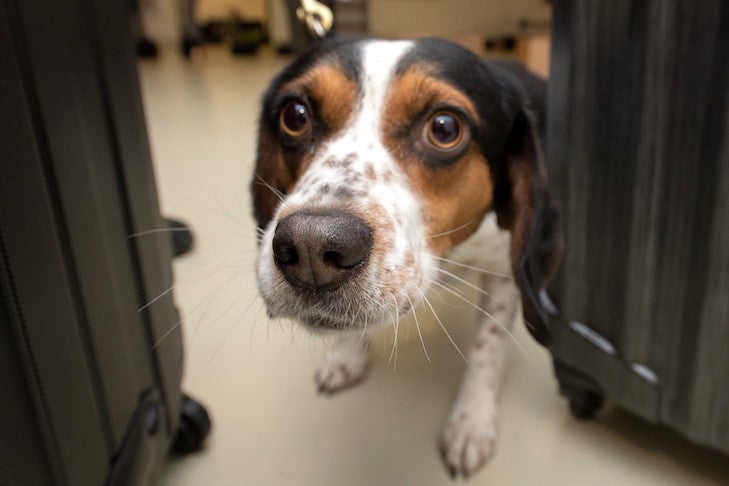 It was a call that all breeders dreaded.

The young couple, who adored their pup, announced they had a new baby, giving their dog no time.

“I gladly take one of my puppies back if the owner lets me know they don’t want the dog. In fact, it’s in my contracts that they contact me first.

The year-old Beagle was quickly returned to his kennel in Alabama, and the owner of Encore Beagles felt relieved. He was healthy, socialized and intelligent.

“Baymon had an exceptional temperament and he was exceptionally good at obedience and other fun events. I quickly got his Fast CAT title on him.

NeSmith was at a dog show when a representative from the United States Department of Agriculture (USDA) approached her and told her about the need for Beagles to work as agricultural detection dogs. She immediately thought of Baymon.

“She tested him for his temper. He passed with flying colors and entered their program,” NeSmith said.

That was nine years ago, and Baymon recently retired after a stellar career as a detection dog at Fort Lauderdale Hollywood International Airport in Florida. His sharp nose has located large quantities of foreign contraband, such as meat and vegetables, preventing him from entering our country and introducing diseases or pests that can harm crops and forests. Baymon made many major discoveries, but it was a momentous day when he alerted to a suitcase containing an entire pig’s head, said his handler Alberto Gonzalez of US Customs and Border Patrol.

“Baymon loved going to work, for him it was like playing hide and seek every day,” Gonzalez said. “Nothing really phased him. Even though we had large crowds of people, carts and loud sounds, he was still focused on finding his target.

The USDA desperately needs more dogs like Baymon to do this important work, said Monica Errico, training specialist at the USDA’s National Detector Dog Training Center (NDDTC) in Newnan, Georgia. The pandemic has made it even more difficult to locate canine candidates.

“Since the onset of COVID 19, the USDA Training Center has canceled all scheduled classes and halted the purchase of dogs,” Errico said. “The pandemic has made it extremely difficult to travel outside of our Georgia commuting area to vet potential candidates due to agency travel restrictions.”

Beagles and Beagle mixes are the best choices for USDA work at airports and ports.

“Beagles are non-threatening due to their small size, soft eyes and droopy ears, and playful, loving, and even temperament,” Errico said. “Dogs are excellent at using their noses to hunt. When trained as agricultural detector dogs, they are exceptional at locating fresh fruit, plants and meat among many other smells that are found in passenger luggage.

The NDDTC also trains Labrador Retrievers and Lab mixes to work in freight, postal and parcel facilities, vehicle/border crossings and on national projects. Labs, like Beagles, have great hunting ability and friendly personalities, but have the largest size to search higher in cargo warehouses and trucks.

The same characteristics that can make Beagles and Labs excellent detector dogs also make them popular pets, which has created an even greater shortage during the COVID crisis.

“The pandemic has made it possible for many people to get a dog due to people’s ability to telecommute and be home most of the time with their dogs,” Errico said. “In turn, there are fewer Beagles brought into shelters.”

The NDDTC seeks candidates from many places, including shelters, rescue organizations and breeders. The center would like to work with more breeders as the dogs are likely to be healthy and socialized.

Kevin and Kim Shupenia have been breeding Beagles for nearly 30 years and have produced dozens of conformation champions at their Jackpot Kennel in Georgia.

But for the past five years, their dogs have also gone to work for the government. Six of their Beagles serve as detector dogs at airports across the country. The service is a good option for some dogs returning from a pet home or not continuing their breeding program.
“I think it’s important work for the Beagle because they love the work, and it’s good communication for the breed,” Kevin Shupenia said. “I personally want them to use dogs that look like an AKC Beagle as much as possible because that represents us all well.”

The Shupenias attended the graduation ceremony for two of their dogs after completing their training.

“It made us proud to see our dogs receive their vests and be assigned with their handlers in their new locations,” Kevin Shupenia said.

Before buying a dog, the USDA evaluates dogs for temperament and trainability. They are looking for dogs between the ages of 1 and 4 years old who have:

NDDTC trainers conduct the official temperament assessment at Hartsfield Atlanta International Airport. “We assess their temperament by exposing the dogs to sights, sounds and crowds of passengers,” Errico said.

If the dogs pass the tests at the airport, they proceed to a thorough medical examination, including X-rays and blood tests.

“They are trained to sit down and identify agricultural products such as fruit, meat and plants in luggage. We use positive reinforcement such as treats to shape behaviors,” Errico said. “They are also trained not to react to many similar products such as fruit candies, soaps, spices, cheese, bread and fish.”

Successful dogs are paired with a handler and attend a course at NDDTC, where they learn to become a team. The canine teams must pass a certification and then are deployed in their ports. Most Beagles go to work for the NDDTC’s biggest client: US Customs and Border Patrol.

“Beagles are the first line of defense against pests or diseases that harm our crops and forests,” Errico said.

A pest infiltration could cost the United States billions of dollars in eradication, crop yields, effects on animals and economic trade.

Since Baymon, NeSmith has brought two more dogs into service with the USDA. She encourages other breeders to consider placing dogs in a role where they can help the country.

“If I have a puppy that won’t make the show dog world, but has a great personality and loves to work, I call the USDA,” she said. “It makes me happy to see my dogs doing something they love.”

As for Baymon, he is 10 years old and retired at home with his master Gonzalez where he is taking a well-deserved rest for his years of service.

“He’s sleeping on the couch with his furry sister, Diamond, a rescued Brittany,” he said. “He also enjoys his afternoon walks around the neighborhood, eating snacks, Netflix and relaxing.”