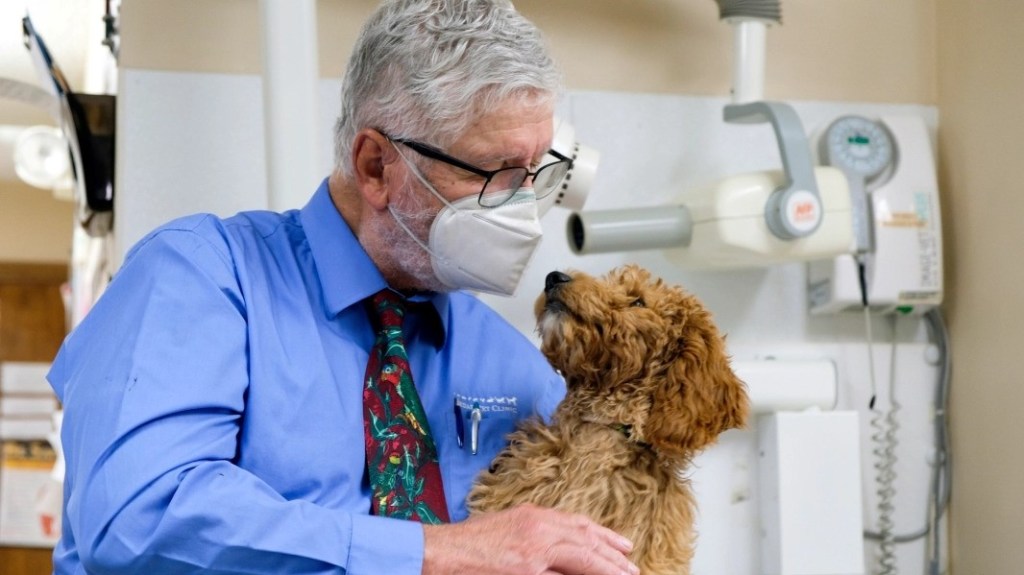 John Baillie performed a C-section on a 15ft boa constrictor.

He punctured and cleaned an abscess on an elephant, surgically removed a welder’s leather glove from the intestinal tract of a Labrador retriever and treated a tarantula for respiratory disease.

He even operated on a goldfish. The beloved pet had a tumor on its side, near its tail, and its owners asked Baillie if there was anything he could do for it.

“I anesthetized him and operated on him,” said Baillie, owner of Cedar Pet Clinic in Lake Elmo. “Remember goldfish are carp so they last a long time out of water. It was a very quick operation. I removed the tumor, sutured it and put it back in. the water.

“Basically, if it comes through the front door, we’ll work on it,” he said.

The job is not for the faint of heart.

Baillie, 74, of Saint-Paul, had his shoulder dislocated by a horse; picked up psittacosis, a rare infectious disease, from a parrot; and been scratched by a tiger.

“Despite all the bad news about ferrets, I’ve never been bitten by a ferret,” he said. “I happened to have snakes clinging to me. I was trying to listen to the heartbeat of a 10 inch long snake one time, and I put it to my ear, and it reached out and grabbed my earlobe and wouldn’t not let go.

NEVER KNOW WHAT DAY WILL BRING

After five decades of treating animals, Baillie said he was never bored.

“A lot of people who do the same thing all the time, if they just see dogs or dogs and cats, you might see very similar issues all day,” he said. “For me, I never have any idea what I’m going to see and what I’m going to do.”

On Thursday morning, for example, he treated a Rottweiler, a Russian blue cat and a cockatiel. He also saw a ferret that had skin cancer, performed oral surgery on a guinea pig named Boy, and reviewed x-rays of a cat named Pepper that had swallowed a whistle. Pepper, he said, was very ill and would need surgery.

Dealing with a wide variety of animals means Baillie and his staff must “continue to learn about these animals and add to our knowledge,” he said. “It helps that we have the technology to deal with it. I can do blood tests on a budgie and find out white blood cells and red blood cells and liver and kidneys and general health function on just a few drops of blood.

In addition to treating tarantulas with respiratory problems, Baillie had to amputate the legs of the large hairy creatures. “They hurt each other and you can’t put them back together, so you amputate it close to the body,” he said.

It is not uncommon for him to operate on mice and rats to remove cancerous tumours. “They’re used for preliminary cancer studies, so they’re bred to be cancer-susceptible, and they are,” he said. “It’s very common to have cancers of the mammary gland, and the surgery at least saves you time. It doesn’t always cure it, but it’s true for everything else too.

HIS APPROACH TO ANIMAL CARE

“He spent time with me discussing Dolly’s future with canine cognitive issues and her quality of life with that, as well as other health issues,” said Knoll, who lives in Lake Elmo. “That’s what I appreciate so much about Doc: he takes the time to fully explain both the good and the uncomfortable issues a pet owner has to consider.”

Employee Linda Stratig, who works in client care at Cedar Pet Clinic, met Baillie in 1994 when she brought in her late Great Dane/Labrador mix, Abigail Victoria, for care.

“I had a brand new puppy and was looking for a vet who had the same values ​​as me – someone who would go the extra mile, always be honest and upfront with me, and take care of not just my pet, but me. as a customer,” she said. “I’ve been a customer ever since.

Stratig, who started working for the clinic in 2001, said Baillie is known for his “huge heart.” He really exudes a love of people taking care of their pets.

Sue Walter, certified veterinary technician, has worked for Baillie since 1987.

Baillie, who grew up in Roseville, decided he wanted to become a veterinarian at the age of 14 after spending an evening looking for Penny, his family’s pet beagle.

Penny used to wander the neighborhood and would often visit Lynn Rundquist, a University of Minnesota vet student who lived in the neighborhood, he said. “Penny had an ear problem, and she knew if it hurt, she should go see him, and he could help her,” he said.

One night, Penny didn’t come home, and Baillie’s mother woke Baillie around 11:00 p.m. to go out and look for her. “She wasn’t in any of her usual hangouts, so I came home and my mom said, ‘Well, you better go see Doc (Rundquist). He’s probably still studying and seeing if he’s seen her,” he said. “I go down there and here he is, sitting in a chair in the living room with a textbook leaning on Penny’s back, and Penny was fast asleep.

“I just thought if an animal could trust a person that much, well, that was just something I had to do,” he said.

Baillie graduated from the University of Minnesota College of Veterinary Sciences in 1972. After working at a clinic in Eagan for a year, he and a partner co-founded the Cedar Pet Clinic in South Minneapolis in 1973.

“When we started the clinic, we wrote a letter to the 100 clinics in the five county area and said if people had clients with birds, we would see them,” he said. “I think all the vets at these clinics said, ‘Hmmmm. If they see birds, they’ll see anything, and that’s what happened. ”

HE WILL CONTINUE HIS WORK

Cedar Pet Clinic expanded to Lake Elmo in 1996 after Baillie and his wife, Margaret “Peg” Guilfoyle, who lived in Grant, decided it was time to find a practice closer to home.

“I was leaving at 7 in the morning and on a very, very good day, I was coming back at 7 in the evening,” he said. “(Peg) was sick of me never being home.”

Lake Elmo Clinic’s hallmark is its collection of animal-shaped mailboxes. The current mailbox is shaped like a beagle; previous mailboxes include a cat, chicken, rooster, macaw and golden retriever.

“A lady in Florida makes them for us,” said Maggie Baillie, Baillie’s daughter and Cedar Pet Clinic director. “It started in 2006, then we started to be known for them. We’re the crazy mailbox people.

The removed mailboxes are “planted” in a field of daylilies next to the clinic. “We have seven,” she said. “The cat is missing an ear. We have a chicken that has lost a wing. Let me put it this way: mailboxes need veterinary care. »

From 2001 to 2013, he was Medical Director of Wildlife Sanctuary at Sandstone. He is also the former kennel vet for the Minnesota Horse and Hunt Club. For 45 years, he has been providing free care to pets in retirement homes.

Baillie, who owns a rescue gray tabby cat named Wheezy, works three days a week. He says he has no plans to retire.

“I still really love what I do,” he said. “I had a client a few years ago who was the third generation of the family I had seen. I had another client who was the daughter of one of my favorite instructors at the University of Minnesota.

“And then there’s always the last visit,” he says. “I have to do this, and it’s getting hard. My personal approach to this is that when I no longer mind slaughtering an animal, then I will stop working.