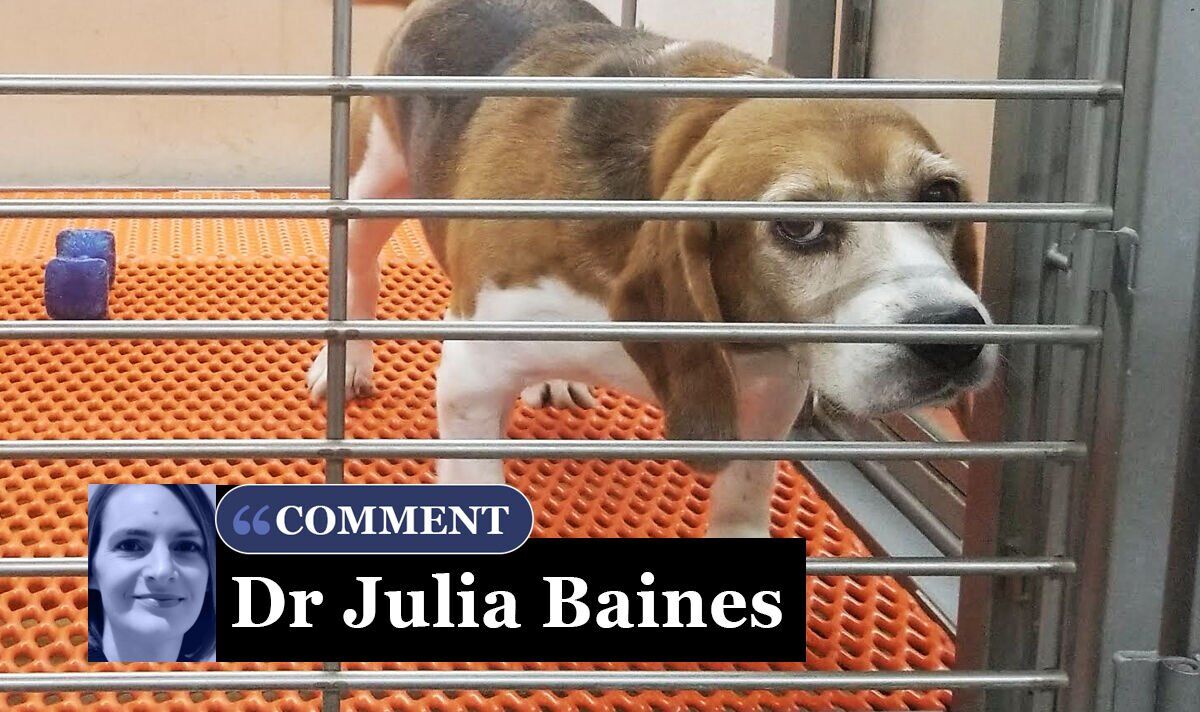 Thousands of dogs are put through gruesome and terrifying procedures, day after day, before being killed and sometimes dissected – all in the name of science.

You might think that in today’s world, laboratory experiments don’t involve dogs or cats. But they do, and testing them on them is completely legal. In 2021, over three million scientific procedures were performed on animals in the UK. Dogs, cats, horses and primates were used in nearly 18,000 of them.

Most of the dogs used are beagles, as they are so gentle that they often don’t even bite or scratch when scared or in pain.

What animals endure is almost unimaginable. Dogs can be imprisoned in windowless cells, where experimenters tightly place cones on their noses so they can pump toxic substances into their lungs. The dogs scream and cough, but the chemicals keep coming.

When the cones are finally removed, for a moment the dogs can breathe freely. They may think their ordeal is over. But for the rest of their short lives, they will be subjected to similar torments, and eventually they will be killed and dissected.

Dogs can be drilled, operated on, injected, implanted with devices or deliberately suffer heart attacks. Many also endure ‘gavage’ – a thick tube shoved down their throats to pump chemicals or experimental drugs into their stomachs.

It’s the same gruesome method used to force-feed geese with grain and fat to make foie gras, a procedure so cruel it’s banned in the UK. But in laboratories, the practice continues.

Some dogs are bred to have crippling diseases and can spend their short, miserable lives in agony, too weak to walk and barely able to breathe.

Some UK labs breed their own dogs and if the pups are deemed unsuitable for experiments, they are killed.

In 2017, 1,155 dogs were born in the UK in approved facilities and 97 were killed for reasons such as sex not required, to limit population size or so that their tissues could be harvested.

Other dogs are being shipped to the UK to be used for testing. These dogs are locked in cramped crates and subjected to grueling air travel, then tortured in labs until they are killed.

Like all other animals, dogs are individuals, not test tubes.

They deserve better than to be taken from their mothers, experimented on and killed. Experimenting on animals is a habit – an easy option for scientists.

The large differences between species mean that the results of these experiments are not easily transposable to humans, but millions of pounds are spent on them.

We need a better way – and PETA scientists have found it. The Research Modernization Agreement (RMD) is a strategy to end animal experiments and instead use advanced, humane research methods such as human organs on a chip and computer modelling.

In 2021, after receiving the MDR, the European Parliament called on the European Commission to create an action plan to end all animal testing.

The UK government must commit to ending these cruel and outdated tests, for the sake of the dogs, cats, horses, primates and millions of other animals who currently suffer out of public view.

Dr. Julia Baines is Science Policy Manager at People for the Ethical Treatment of Animals (PETA).