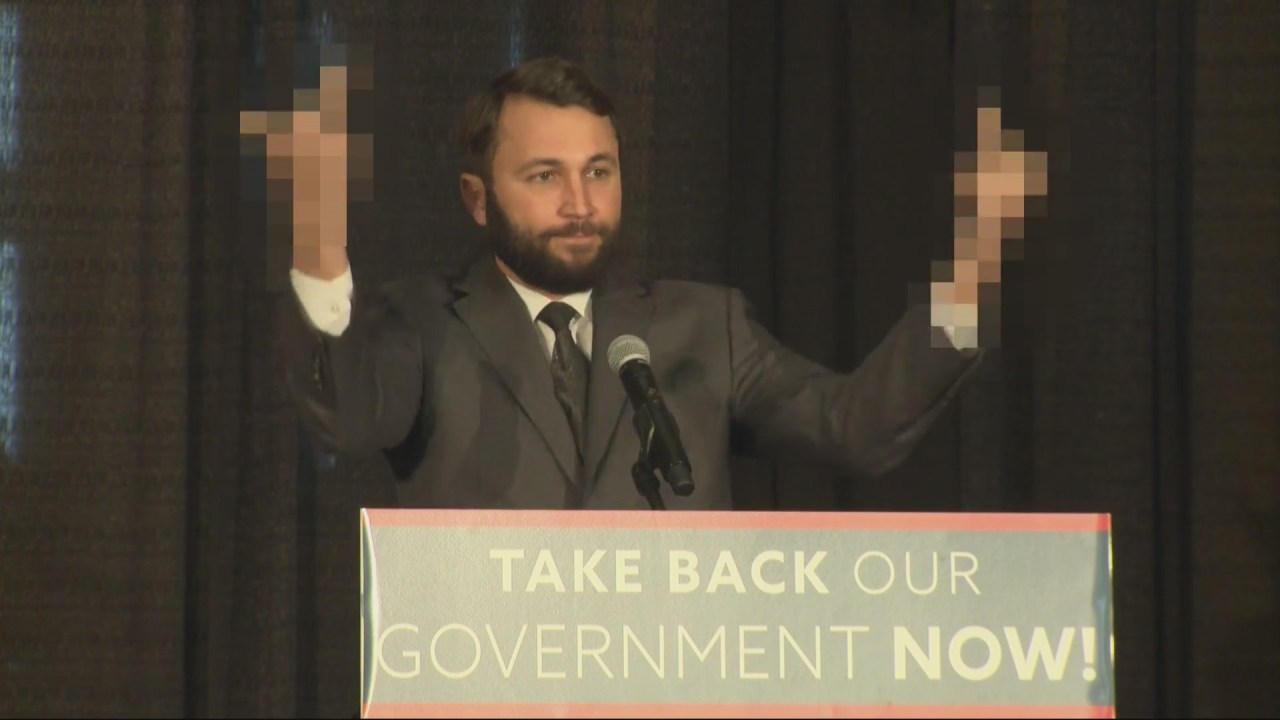 DES MOINES, Iowa — An Iowa lawmaker “knocked down” those he said he doesn’t believe as he does during a rally at the Iowa Statehouse on Tuesday afternoon. Representative Bobby Kaufmann – a Republican from Wilton who is the son of Iowa Republican Party Chairman Jeff Kaufmann – made the obscene gesture as he ended his remarks in front of a few hundred supporters of the States Convention Movement in the Rotunda of the Capitol.

“As for these tyrants who grab guns, hate freedom, over-regulate and violate civil liberties,” Kaufmann said, “Here is my message… (raises two middle fingers) thank you. “

Various speakers at the rally urged Iowans to join a movement to limit federal government powers and spending.

“Is the federal government a tyranny? a speaker asked the crowd. The crowd responded, “Yes!

Speakers complained about federal government terms and also want term limits for members of Congress, but did not discuss specifics. Proponents of the States Convention are trying to get 34 of the country’s 50 states to support a convention where state representatives would try to change the constitution if three-quarters of the states agree on a measure. The process has never happened before in the country. They say 16 states have approved the move so far.

Several other Iowa lawmakers spoke at the rally. Sen. Jesse Green, a Republican from Boone, expressed disappointment that congressional Republicans have not addressed federal spending he considers excessive. “I, like many of you today, thought the Republicans we sent to Washington would honor their word and get their finances in order,” Green told the crowd. “Unfortunately, that trust remains unfulfilled.”

Rep. Shannon Lundgren, a Republican from Peosta, said of officials in Washington, DC, “They are not responsible for us. We are in charge of them.

The rally also included 2012 Iowa caucus winner Rick Santorum, a former U.S. senator from Pennsylvania. He said when he was campaigning in Iowa a decade ago he had doubts about the premise of the States Convention and said this year he had a change of heart.

“A lot has changed in ten years…with this country and the federal government,” Santorum said, “As bad as it was when I campaigned here ten years ago…it’s far beyond what I think any of us expected to happen this quickly.” He added: “My big concern is that it happens on both sides with both sides. We have too many in Washington who are too comfortable with all the power they have. And like this power and are not interested in giving back to the people or the state.

Santorum’s speech was interrupted for several minutes when a few dozen animal rights activists chanted and marched near the podium. Supporters of the States Convention then shouted “USA, USA, USA”