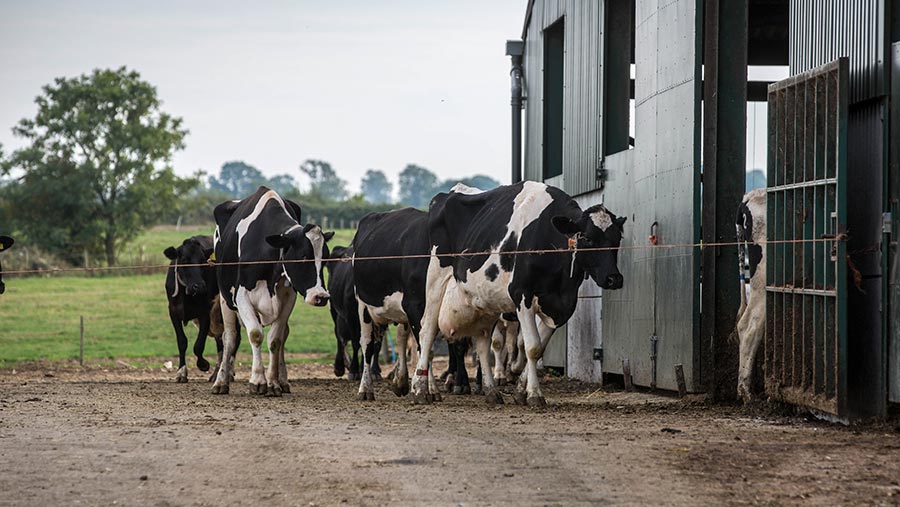 Dairy farmers reacted with dismay to a BBC Panorama program broadcast on Monday (February 14) – The life of a cow: the true price of milk – which showed examples of poor welfare practice at an unidentified Welsh dairy farm and linked it to low margins for primary producers.

Much of the program was filmed by an undercover representative of animal rights group Animal Equality.

See also: Read all of our dairy health and wellness content in one place

The program included scenes of calves being knocked off a tractor bucket, cows being repeatedly kicked and punched, a dying cow left for 24 hours before a slaughterer arrived, and another cow “in purlin” partially lifted on a telehandler and dragged over concrete to a mulched area.

More generally, the show addressed the issue of calf separation – with experts explaining that it’s best done as soon as possible – and lameness resulting from high milk production and long waiting times.

Farm veterinarian Roger Blowey told the programme: ‘It would be unusual to find a herd without lameness’ and suggested lifting cows on a hoist was ‘common practice’.

There was some ’emotional’ language used, for example the lines ‘little of this milk is for her own calf’ and ‘the calves probably won’t see their mothers again’.

The program also contrasted “standard” milk production with the practices The ethical dairy in Scotland, where calves are kept with their mothers for five months, cows are milked once a day, and bounties are made by turning the milk into cheese and ice cream.

He also suggested that the low welfare displayed was the result of low prices and tight margins. He noted that the Welsh farm in question – which was insured by Red Tractor – sold its milk to Freshways, which is said to be one of the lowest paid.

Presenter Daniel Fosso calculated that a 2 million liter dairy herd sold to one of the five main payers over seven years would have earned £240,000 more.

NFU Cymru Vice President Abi Reader told the program that even a 1p/litre supplement would allow the farmer to invest in better care facilities.

Farmers react to Panorama were quick to condemn the poor welfare practices shown, but were adamant that they are not representative of the vast majority of UK dairy farmers.

Taking to social media, Shepherd Rob Pooley tweeted: ‘So disappointed in the #BBC they have shown the despicable actions of these workers on dairy farms but they won’t show the other 99% of dairy farms at the UK producing quality milk with the best animal welfare in the world please don’t everyone think this is the standard #Panorama”

So disappointed with the #BBC they showed the dastardly actions of these workers on dairy farms but they won’t show the 99% of other dairy farms in the UK producing quality milk with the best animal welfare in the world, please please, not everyone thinks this is the norm #Panorama

Pembrokeshire dairy farmer Steve Evans also urged: “Don’t tar all farmers with the same brush. I am as appalled as you are by the abuses on this farm and I hope there will be prosecutions.

Do not tar all farmers with the same brush. I am as appalled as you are by the abuses on this farm and I hope there will be prosecutions.

Cumbrian cheesemaker Martin Gott observed on Twitter: ‘Yes cruelty does happen on some farms, that’s never right. In my experience, this is far from the norm and increasingly rare.

Panorama. Yes, cruelty happens on some farms, it’s never good. In my experience, this is far from the norm and increasingly rare. What is becoming increasingly common are farmers suffering from mental health crises and feeling disconnected from society, compassion is the greatest of virtues.

And Sussex dairy farmer Phil Nash, responding to a viewer who described the Panorama program as ‘the last straw’, tweeted: ‘Please don’t think it’s the day before every dairy farm, on our farm, we respect and take care of our cows, this is a tiny minority.

Please don’t think this is the eve of every dairy farm, on our farm we respect and care for our cows, that’s a tiny minority

Animal Equality, however, disputed this. “We have investigated four UK dairy farms over the past six years and found violent treatment of cows and/or illegalities on all of them. This is never the case of a single farm or a single worker being a ‘rotten apple,’” he said in a statement.

Lawyers for the group submitted a formal complaint letter to Carmarthenshire County Council, the local authority where the farm was listed on Panorama is based. “We urge that the farm be prosecuted and held accountable for its crimes.”

He also started a petition calling on the government to introduce a licensing system for farms, increase farm inspections and better protect farm animals.

Sequel tonight Panorama, I think it’s time for those of us who are professionally involved with animals to carefully consider these exposes and decide that it will not be tolerated in any form. Society does not want, cannot and must not accept what we see, and neither do we.

We know that Red Tractor and Supply Chain Standards generally do a good job, but they can’t monitor 24/7 operations. If we want to build trust in what we do, we need to think about how we can increase accountability, increase transparency, and act clearly on what we see.

At a recent conference, a major US dairy company explained that it uses an independent company to install and monitor CCTV, flagging problems on the farm so that incidents and corrective actions can be tracked. If it were affordable and feasible, would UK farmers consider it?

Cow-calf separation is a very difficult issue to resolve, and that’s a shame. Panorama glossed over the huge challenges farmers have to overcome to make this work and the higher yields you need. But let’s at least talk about what we’re trying to do while research and innovation continues to work to solve it

Bottom line – these and other actions are going to be really important if trust is to be built. Society is changing and people care. Many want to support dairy products, so let’s help them.

First, there are unacceptable practices that must be exposed and stopped. Zero tolerance.

Then there’s the shoddy stuff – tired people, bad training, lack of support and neglect that need to be spotted early and fixed before they become common practice.

Then there are things we need to change to modernize the industry and make it fit for the 21st century – showing the care and respect that animals deserve, that people want to see.

But most importantly, it starts with the industry saying “no more, not on our behalf.”