FRIESEN: Coyotes, broadcaster, delivers another black eye to the game 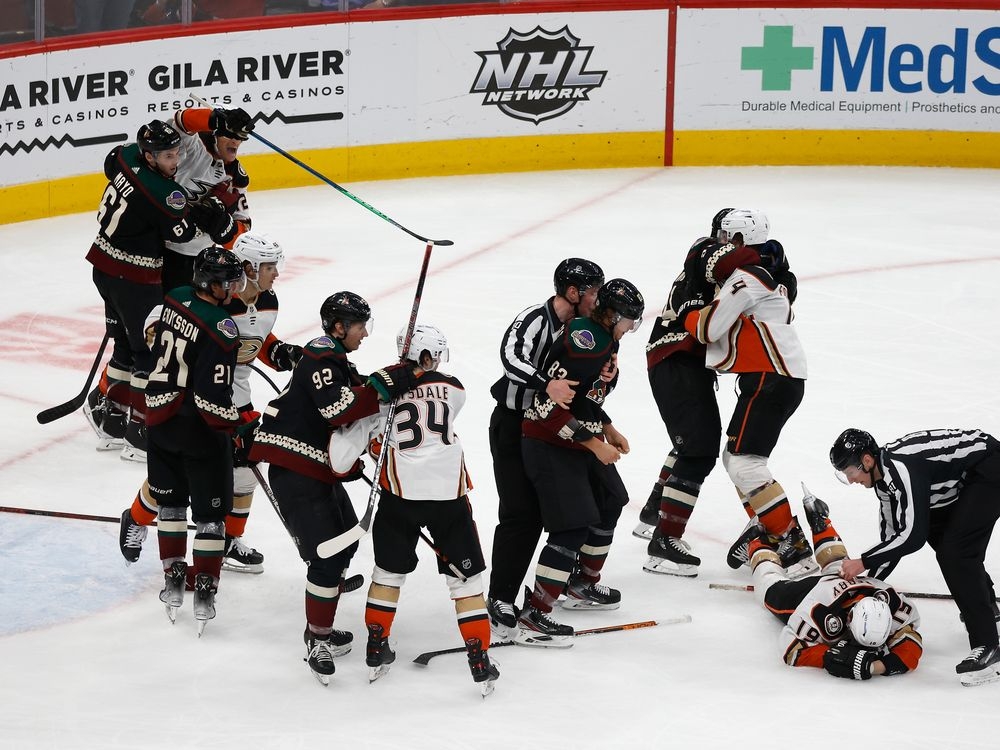 If there’s one Winnipeg Jets player who could pull off “The Michigan,” it’s probably Kyle Connor.

However, he may not want to try the lacrosse move in an NHL game.

He could get a well deserved punch in the mouth.

Of course, this is the biggest load of crap since a parade of “truckers” arrived in our nation’s capital embracing so-called freedom. »

Just as this “movement” exposed some of the underside of Canadian society, the incident involving the Arizona Coyotes and Anaheim Ducks over the weekend exposed the Neanderthal side of hockey.

What is the so-called forward-thinking NHL doing?

And so the game gets another black one.

In case you missed it, Terry is the Ducks player who was beaten almost beyond recognition by Jay Beagle of the Coyotes on Friday. April Fool.

Moments earlier, Beagle had cross-checked Anaheim’s Trevor Zegras for having the audacity to walk into the slot and look for a loose puck late in the game, with his team leading, 5-0.

Terry had come to the defense of Zegras, unleashing a melee we’ve seen a thousand times.

Only this time, the 6-foot-3, 210-pound Beagle decided that hitting a much smaller, more skilled player he was 25 pounds over was just reward for the blows the Ducks were putting on the Coyotes. .

It was a unanimous decision, 11 strokes to nil. Terry never even dropped his gloves, his body going limp and taking beatings even as he fell helplessly.

The “fight” was as lopsided as the skill level between the two: 31 goals for Terry this season, one for Beagle.

And show the world what a poor loser he is.

Ducks and Jets great Teemu Selanne posted a photo of a beaten up Terry on Twitter, with the caption: “I don’t like the way these young Ducks stars are getting pushed around.”

I don’t know if he was joking.

“That’s the problem sometimes with these young players,” Nash said, although it was obvious Terry was injured. “You want to embarrass the guys and you want to improve yourself? You better be ready to get punched in the mouth.

Nash, like Beagle, knew the penalty box much better than the scoresheet in his playing career.

So he put common sense aside and sided with the player on the team he’s covering. Where does it say you have to check your brain when you get your paycheck?

“I love him. Good for Jay Beagle,” Nash told the audience. “He’s a veteran player who’s been around a long time, and he’s watching these young kids dance, these fancy moves…”

This appeared to be a reference to the “Michigan” goal scored by Zegras earlier in the game.

Nash would unsuccessfully try to explain himself in later interviews, saying his comments did not refer to the goal, but to the “smile”, the “smile” and the Ducks’ goal celebrations as they waltzed to victory.

Apparently you’re supposed to put your head down and not like scoring goals. If you have a little too much fun, you will get beaten.

“So that’s something you have to be prepared for,” Nash said.

When asked if Beagle should have let go when he realized Terry wasn’t even fighting back and was hurting himself: “No, not at all.”

We understand that live TV is difficult. Sometimes things come out of your yelp that shouldn’t.

But Nash dragged his fingers in subsequent interviews and doubled down on his stone-aged shtick.

Unfortunately, he is not alone.

Look no further than the NHL’s inaction. Beagle continues to roam the matches, while Terry remains absent.

There is no suspension, not even a hearing, despite the fact that it was a blatant attempt to injure an opponent. A case of abuse of a player in a vulnerable position.

“I’m embarrassed for whoever it is, and I won’t say their name,” Zegras said after the match, landing the only blow Beagle took that night. “That’s a bad look for the league…and he should be f— punished.”

Jets defenseman Nate Schmidt was asked to weigh in on the incident this week, and he pointed to the unwritten code of not embarrassing your opponent.

Schmidt likened the Ducks’ actions to a football team throwing bombs 75 yards with a 40-point lead.

Because a player was looking for a loose puck in the crease?

Schmidt didn’t condone Terry’s beatings outright, but he didn’t condemn them either.

If all the noise around this incident makes even a young player think twice before “improving”, hockey has once again taken several steps in the wrong direction.

Sign up to receive daily news from the Edmonton Journal, a division of Postmedia Network Inc.

Thank you for your registration!

A welcome email is on the way. If you don’t see it, please check your spam folder.

The next issue of Edmonton Journal Headline News will soon be in your inbox.

We encountered a problem during your registration. Try Again