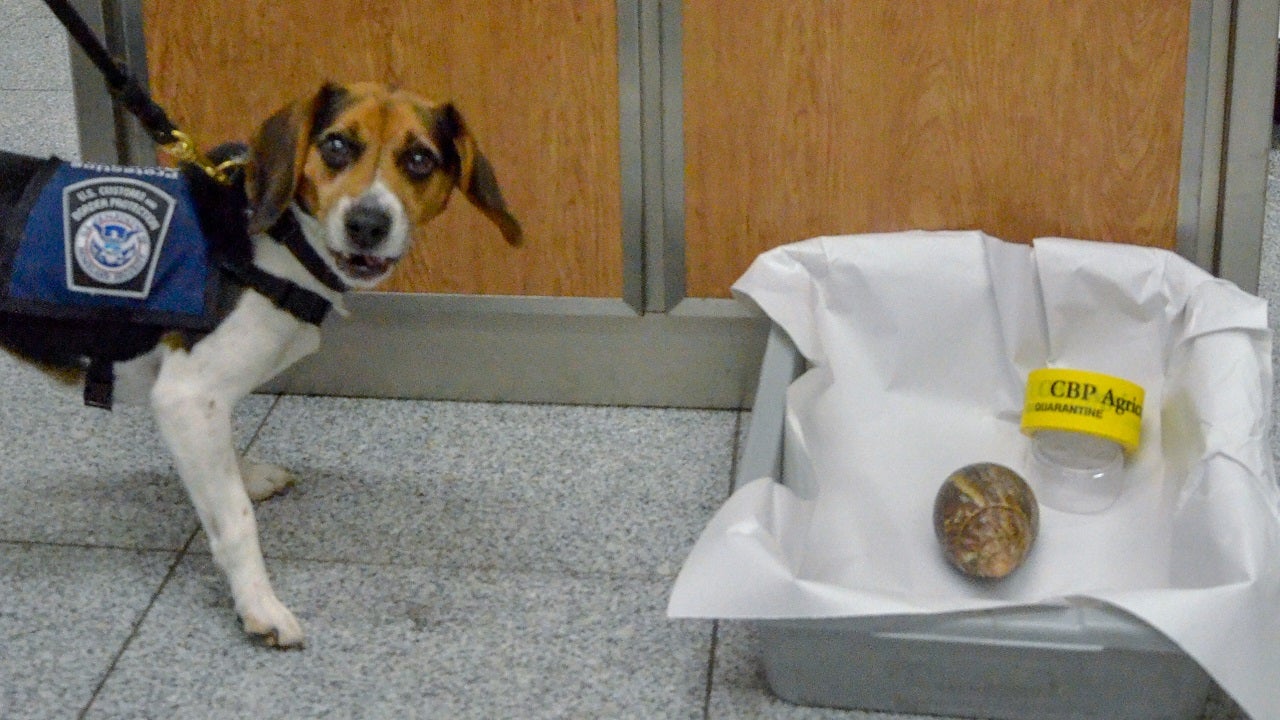 Why did someone try to introduce a giant invasive African snail into the United States?

The Beagle Customs and Border Protection Squad found a giant African snail the size of a Little Leaguer baseball glove in the suitcase of a woman traveling from Nigeria to Texas via Atlanta Airport .

ATLANTE – The so-called ‘Beagle Brigade’ at Atlanta airport has found a stash of banned items from overseas, including a huge invasive snail, which agriculture officials consider one of the more destructive.

The Customs and Border Protection K9 unit at Hartsfield-Jackson Atlanta International Airport picked up the smell coming from baggage arriving from Nigeria on Nov. 8. Inside the suitcase, federal inspectors say a live giant African snail was found along with prohibited goat meat, skins, melon seeds and vegetables.

“The Incredible Beagle Brigade is a valued member of CBP’s Agriculture Mission Team that protects our nation from highly invasive pests such as the Giant African Snail,” said Clay Thomas, Port Regional Director for Customs. and Atlanta Border Protection. “This was an important discovery for our K9 Farm Team – an essential part of our nation’s frontline defense against all pests that threaten our agricultural resources.”

Prohibited items were seized. CBP has not said what happened to these items from there, but in the past the items have been destroyed. As for the snail, CBP says they tried to find a place for it.

“We worked diligently to find a home for the giant snail, but unfortunately had to put it to sleep,” said Rob Brisley, US Public Affairs, Customs and Border Protection.

The snail weighed somewhere between a baseball and a softball, according to CBP.

“When speaking with this passenger, she could not be specific except that she was bringing her from Nigeria to Texas,” Brisley said.

The traveler was warned of the carriage of contraband and allowed to continue to her final destination in Texas.

Brisley says a trash can full of vegetables, fruit and other prohibited items is seized at Atlanta airport by CBP officers every day. He says it’s rare to come across a snail like this, but it’s not the first time. In 2019, two snails were intercepted at the airport as well as prohibited fruit.

International travelers are urged to check CBP’s Know Before You Go website and always declare any food when crossing the border.

(Courtesy of US Customs and Border Protection)

Why is the giant African snail so dangerous?

The mollusc can consume 500 different types of plants. It can also cause structural damage to plaster and stucco structures and carry a parasitic roundworm that can lead to meningitis in humans.

The snail is particularly dangerous for agriculture in Florida, Hawaii and the Caribbean.

“If it got loose, on the farms, the vegetation, these things were eating around the clock and the damage could be overwhelming,” Brisley said. 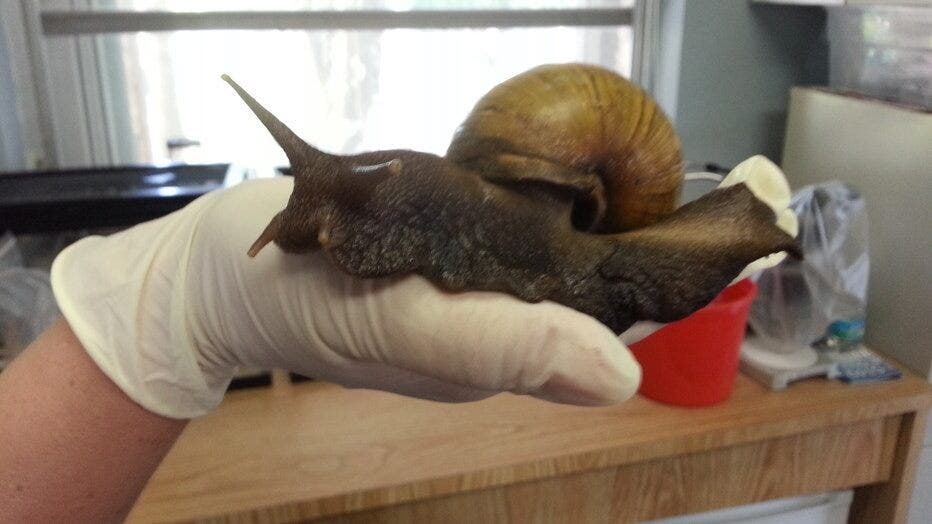 Federal agriculture officials say a 1960s invasion in Florida cost $1 million and took 10 years to fix. A second infestation in 2011 in Broward and Miami-Dade counties took another decade to fully eradicate.

Last June, another snail was found in the Tampa Bay area. It was about 8 inches long.

Each snail has female and male reproductive organs, so they can reproduce quickly. It can breed multiple times after mating once.

They can produce around 1,200 eggs per year.

These types of snails can be used in certain culinary dishes, kept as pets or marketed.

What is the Beagle Brigade at Atlanta Airport? 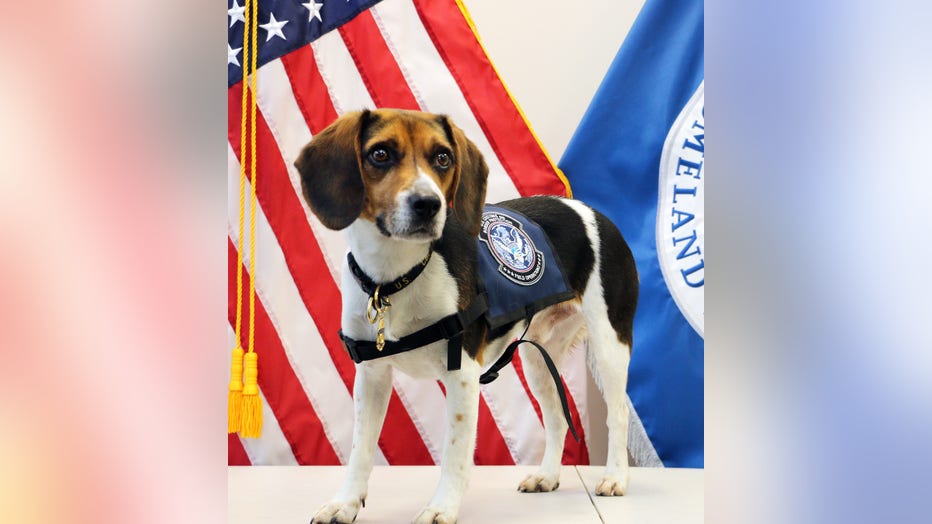 K9 Mox is credited with finding the Giant African Snail.

“Mox is one of the few beagles in service in Atlanta and at airports nationwide,” Brisley said. “But the beagle itself, just a wonderful dog, all they want is to find food.”

Many dogs in CBP’s Beagle Brigade are rescues from Georgia animal shelters. Some have even been rehabilitated after years of abuse. 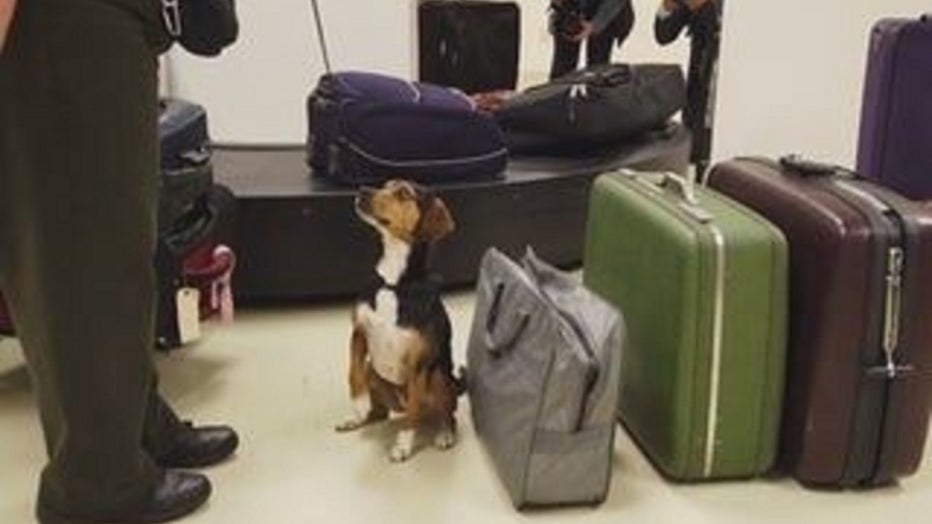 The dogs are trained at the National Detector Dog Training Center in Newnan. Most Beagles, Labs, and Jack Russell Terriers are trained for the job. The dogs are then deployed at US international airports and at border crossings as well as mail and cargo facilities.

The dogs are instructed to search primarily for apples, citrus fruits, mangoes, beef and pork on the prohibited list. One such bust occurred in 2018 in Atlanta when the Beagle Squad arrested an Ecuadorian traveler carrying a fully cooked pig. 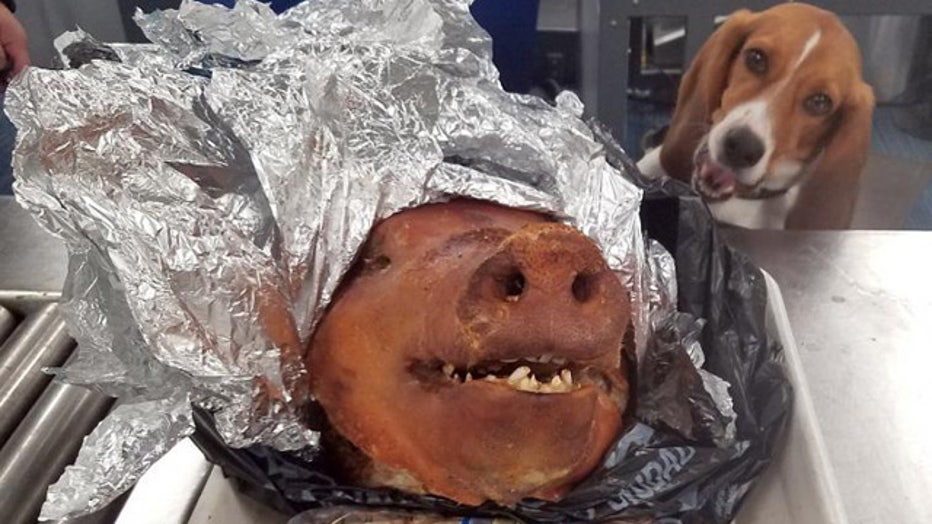 (Courtesy of US Customs and Border Protection)

The United States bans all pork and pork products from other continents to prevent the introduction of diseases such as foot-and-mouth disease and classical swine fever.

Some of the dogs are trained to detect snakes and then are sent to Hawaii to protect the islands from snakes.

The public can also adopt dogs that are not part of the program.

FOX 13 contributed to this report