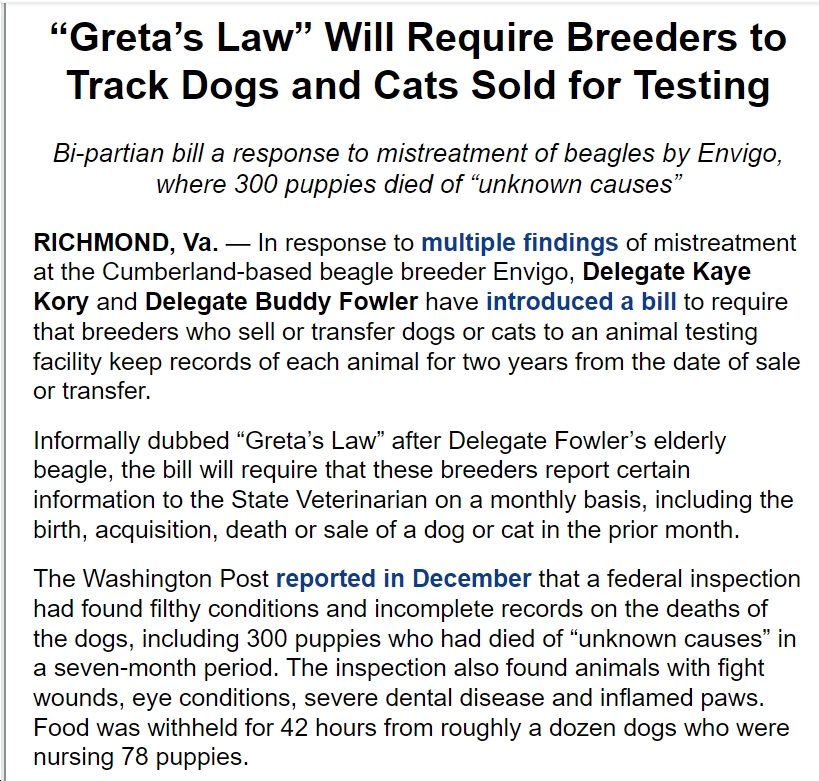 “Beagles in facilities like Envigo spend their entire lives in cages, deprived of the companionship and exercise these social, active dogs need,” says Gina Lynch, community engagement manager for the Humane Society of Fairfax County and Virginia Coalition for Beagle Protection. “The Virginia Coalition for Beagle Protection thanks Del. Kory for his continued commitment to animal welfare and his determination to hold Envigo accountable for the deplorable conditions recently exposed for dogs, which earned the company 26 citations for violations of federal animal welfare law and an ongoing federal investigation.

Delegate Kory is a lifelong animal advocate who promised her late rescue dog Ben to create a more animal-friendly Virginia. She founded the Animal Welfare Caucus in 2018 and has been recognized by organizations like PETA and the Humane Society for her tireless efforts to end animal cruelty in the Commonwealth. His bill to ban cosmetic testing on animals in Virginia went into effect Jan. 1.

Delegate Kaye Kory represents the 38th District in the House of Delegates. She is chair of the House Committee on Counties, Cities and Towns, the Animal Welfare Caucus, the Joint Women’s Health Care Caucus and the Disability Commission. Her legislative focus has largely focused on education, women’s issues, and animal rights. Prior to her election to the General Assembly, Delegate Kory served for a decade on the Fairfax County School Board. She and her husband Ross have three adult children and have lived in Fairfax County for 35 years.

Delegate Fowler has represented House District 55 since 2014. He serves as Vice Chair of the Finance Committee and also serves on General Laws and Agriculture, Chesapeake and Natural Resources. Buddy also serves on the boards of the Virginia War Memorial, Virginia Board of Veterans Services, Jamestown-Yorktown Foundation Board, Joint Sub-committee on Block Grants, History of Enslaved African Americans in Virginia, of the Volunteer Firefighters and Rescue Squad. Workers Service Program (VOLSAP).

Buddy worked primarily in the private sector and was also a small business owner before coming to the Virginia General Assembly as an aide to former delegates Frank Hargrove and John Cox.

A lifelong resident of Virginia, Buddy and his wife, Patsy, reside in Hanover County where they raised their three children. He is a member and served on the diaconate of Slash Christian Church. Buddy is an active member of the Clay Springs Ruritan Club. Buddy is an avid outdoorsman and enjoys fishing and hunting. He is a member of many outdoor organizations including Ducks Unlimited, the National Wild Turkey Federation, the Virginia Hunting Dog Owner’s Association, and the Slate River Bird Dog Club. Buddy is also involved with and supports many historical organizations, including the Hanover Historical Society.