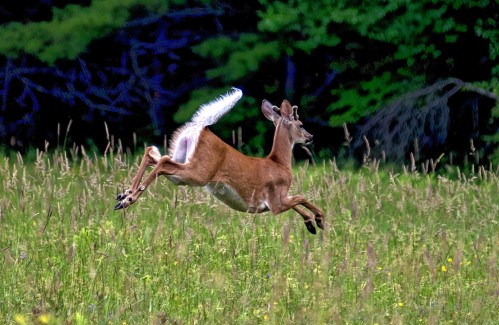 “Bambi” the book is about a young male fawn and its coming of age in a forest. 2023 will mark the 100th anniversary of the publication of the book, whose full publication name was “Bambi: A Life in the Woods”, by Austrian writer Felix Salten.

In the story, forest creatures have human attributes, including the ability to speak; for this reason, some consider the book to be too sentimental. Many people will recognize the story of the Disney version of Bambi and know Thumper the Rabbit, Flower the Skunk and Faline, Bambi’s future mate.

Disney’s version is less dark than the original book. Salten was a hunter. He was familiar with the reality of life’s struggles in nature. Nonetheless, his book reflected a diversion from the idea that animals were simply thoughtless automatons meant to be fodder for sport. “Bambi” is therefore considered to be one of the first conservation books.

And in this regard, Salten was ahead of science and his time. Science now reveals beyond a reasonable doubt the intelligence of many animals, their emotional sensitivity, their capacity for happiness and suffering. We know that consciousness is not the preserve of humans and star animals, apes, chimpanzees, elephants and whales. Those who grew up on small farms can tell you that every pig and every cow is an individual unique in temperament and dreams. Those of us who have pets are aware of the various emotions that dogs and cats experience. Recently there was a TV production “My Octopus Teacher”, which revealed the wonder and intelligence of octopuses which are mollusks like snails!

So when the Gazette headlined an article this year “Deer Harvest Strong During Pandemic” (January 28), it struck a jarring note. Incredible how quickly this euphemism to kill and hunt, “harvest”, seemed to have shifted from rotation to general lexicon. All the more surprising that with political correctness any suspicion of boldness, deliberate or not, towards one ethnic group or another is immediately denounced.

How can a word that was not born out of progressive natural usage, but that was deliberately created to remove any value from other living things, earn such money?

The first time I heard the word used in this way was in Northampton at a meeting on the conservation of fish and game around 2005 regarding the control of the bobcat population through hunting. The spokesperson for fishing and game, a forest ranger, whose salary and departmental funding depend heavily on hunting licenses, used it as if it were the most natural expression.

I looked for the definition. The Merriam Webster Dictionary defined harvesting as the process of harvesting in a culture. At this point, the term as it is used now was not yet ubiquitous.

To be clear; I am not a fanatic opposed to all hunting. People have hunted out of necessity since our beginnings. However, I object to the term “harvest” with its utter disrespect for conscious living and its implicit justification for the unreasonable consequences of rippling in the treatment of other living things.

It goes without saying that the term is fully promoted by the National Rifle Association in addition to the fish and game industries, but it has also been taken up by real estate developers and those in the food industry. Space limits the reporting of the atrocities that take place daily, locally, globally, in laboratories, on factory farms and what is left of nature.

Matthew Scully, an animal rights activist, wrote a book “Dominon, The Power Of Man, the Suffering of Animals, and the call to Mercy”. He wrote: “When more than a million pigs inhabit a single farm, never entering the light of day (until they are led to their death), when every year tens of millions of creatures die without knowing the slightest measure. of human goodness, it’s time to question old assumptions.

The Gazette article mentioned 14,000 deer slaughtered. A hunter in a related article reported that he had little luck on this beautiful day in the woods until a mother doe and her fawn cautiously walked towards him with their heads bowed, when he was able to shoot them all down. of them. Of course, no mention was made of the construction and destruction of the environment which some believe led to the necessity of this massacre.

I’m not brazen enough to pretend I have all the answers. It took me a long time to develop an awareness of other living things as being more than automatons. Many people already know this better than I do. Likewise, there are many who have the capacity to appreciate this and the natural empathy to act on it, but need to be aware of it. Those who use the word “harvest” are trying to prevent that.

There are organizations dedicated to the protection of “the earth and its living creatures” and I count on them for their leadership. But I hope to start a petition to end the use of the word in Massachusetts government publications for the murder of sentient beings. As to whether activities such as these mass hunts / killings are taking place; let them be decided on the basis of the facts, but without obscuring the reality behind this heartless euphemism. We should not revert to the level of ignorance that existed over 100 years ago.

I might need help drafting a petition, getting signatures, contacting the appropriate lawmakers. It is a mitzvah.

Barry Roth lives in Northampton. He can be contacted at [email protected]