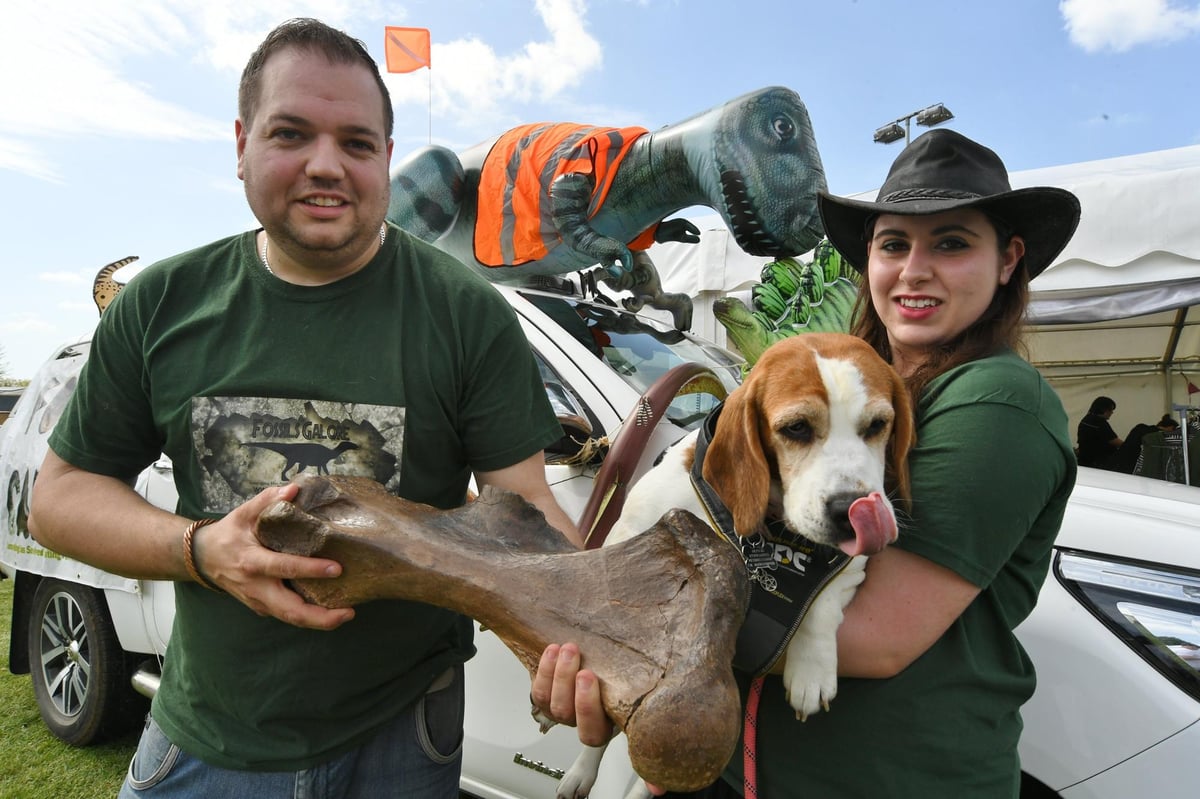 Fossils Galore founder Jamie Jordan and his partner Sarah Moore with Crystal, the fossil-sniffing beagle, at the Yaxley Festival.

A Peterborough beagle, who has been training to find fossils since the age of three, is now playing a vital role in important archaeological discoveries.

“You have to see it to believe it,” said Jamie Jordan, founder of the Fossils Galore Museum and Education Center, of the special talent of his seven-year-old dog Crystal.

“We take bones that we had found previously, let her sniff them, and then she would leave to find the same kind of smell. She’s encountered all kinds of things in the past,” Jamie added.

Register to our daily newsletter

Experience fossil hunting in a quarry with owner Jamie Jordan.

“Some people don’t believe us until we show them a screen.”

In 2018, at a quarry near Peterborough, Crystal discovered woolly rhino bone.

“The quarry workers had stumbled upon a mammoth tusk, but we discovered there weren’t many left,” Jamie said.

“We took her to the site and she came across a woolly rhino bone, which she managed to smell through the gravel.”

Jamie, 32, who lives with his partner Sarah Moore in Werrington, founded Fossils Galore in 2011 when he was 21.

It was during a family holiday in Skegness that four-year-old Jamie discovered his passion for fossil hunting.

“I was walking along a beach and came across this interestingly shaped rock,” he said.

Crystal after a long day of finding fossils

“I took it to a local fossil store, as they didn’t have any museums in the area at the time, and they confirmed it as a dinosaur age bird print.

“We sent photos to the Natural History Museum, which confirmed it, that’s what triggered it from there.”

Jamie was inspired by Victorian paleontologist Mary Anning, renowned for her discoveries in the fossil beds and cliffs of Lyme Regis on Dorset’s ‘Jurassic Coast’.

Anning had a black and white terrier named Tray, who accompanied her while she collected fossils.

It was Tray who inspired Jamie to take the same approach and invest in a furry friend.

Crystal has been Jamie’s sidekick since he had her when she was 18 months old.

“We trained her from a puppy on a reward basis, so every time she found something she got a treat,” he said.

Aside from Crystal’s fossil-finding feats, the couple’s relationship is much more special.

“She’s my little mate,” Jamie said. “I am dyslexic and have ADHD. She takes care of me.

“She knows when I have moments with my ADHD – that’s why I think she works so hard to try to impress me. She always tries to do her best.