MI lawmakers push for animal testing to be regulated 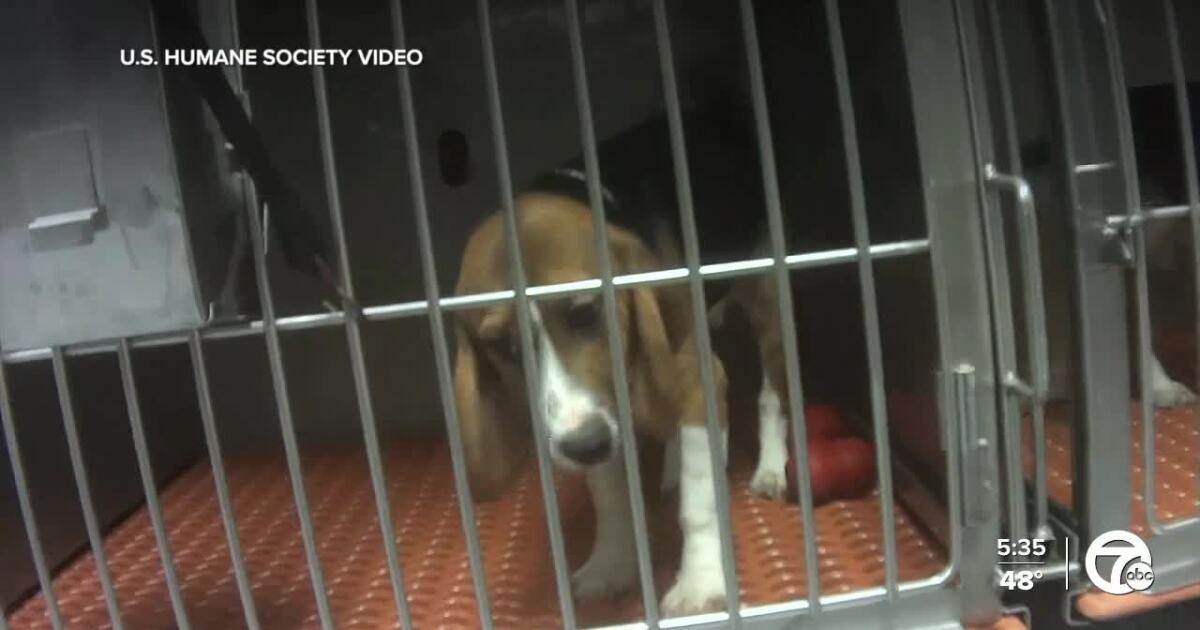 DETROIT (WXYZ) — We’ve highlighted a law introduced in the Michigan legislature to require the adoption of dogs that have been lab-tested. Now we go to one of the institutions in our own backyard, and the pressure to shut down its research to make this adoption law moot.

A protest outside the lab last week, with beds for every known dog that perished in the custody of WSU (Wayne State University) during the search.

136 since 2009 according to the Physicians Committee for Responsible Medicine.

“Cutting their chest cavities, implanting up to nine to nine devices, catheters, attaching those devices to cables and wires which are then tunneled under the animal’s skin through incisions in the back. And then what they do is trigger heart failure or hypertension using these devices,” Merkley said.

Hundreds of documents obtained by PCRM (Physicians Committee for Responsible Medicine) through FOIA (Freedom of Information Act) requests and shared with 7 Action News, detail some of the tests, mostly on Beagles.

HIS FIRST SURGERY TO CONNECT DEVICES TO HIS HEART

Less than a month later, a second surgery involved connecting pacing leads to a ventricle that would manipulate the dog’s heart rate.

A week later, dog number 2002 died. A hole in the aorta that fills the chest cavity with blood. He was euthanized.

Proponents against the ongoing study, including some doctors, say the research has produced no tangible results.

“It is glaring to me that this research has been going on for over three decades and has cost me, the taxpayers, $15 million over that time. And this time those experiments took place and produced no results relevant to humans,” said Dr. Jennifer Giordano of Farmington Hills.

In a statement, Wayne State University defends its study and the National Institutes of Health Funding (NIH), saying in part:

“The NIH (National Institutes of Health) continues to fund this research because its scientists view Wayne State research data and peer-reviewed journal articles as valuable contributions to cardiovascular research. Only the top 10% of all NIH grants in this area are funded, so if the research was not productive and valuable, it would not continually receive competitive funding…”

“Science often does not advance at the pace we would like. Progress is made gradually – and often painstakingly – over years. Just as scientists have not given up on cancer research despite not finding a cure, we believe that this cardiovascular research must continue.

PCRM says it is analyzing similar records from Michigan State University and has filed a request to obtain them from the University of Michigan.

In 2019, a secret investigation by the Humane Society inside a pesticide testing site on behalf of DowDuPont resulted in 32 beagles being saved from euthanasia after public outcry.

The extent of testing in Michigan is not known because facilities are not required to report to state authorities.

WXYZ’s Brian Abel asked, “What could cause change?”

“We asked for an informal opinion from the Attorney General because in the Michigan Constitution it says animal testing must be humane. Well, what is that definition of humane?” the rep said. Matt Koleszar of the 20th district (D).

In this 4-part letter to Michigan Attorney General Dana Nessel, Rep. Matt Koleszar suggesting the Department of Health and Human Services has failed to respect and enforce a mandate requiring labs to register with the state.

“I believe our state has an opportunity to respond to a long-neglected duty and a failure of federal oversight,” Koleszar wrote in the letter.

Meanwhile – some are aware of the tests… pleading for them to end.

“We lose, you know, our humanity by doing this because we wouldn’t be doing these experiments on humans,” Southfield’s Amanda said.

Attorney General Nessel’s office says the request for an opinion is under review.

Here is the full statement from Wayne State University:

Although the use of animals other than mice or rats is rare at Wayne State, we have a federally funded research project involving dogs that is working on new strategies for the treatment of congestive heart failure. and hypertension. Heart disease is America’s number one killer, so there’s a good chance this research will benefit your health or the lives of your loved ones.

Every winter we hear of someone who had a heart attack while shoveling snow. Certain types of exercise trigger a sort of feedback loop in people with high blood pressure or moderate heart failure. How this feedback loop is triggered and why it escalates into a heart attack under certain conditions, such as shoveling snow, is not well understood. Research at Wayne State is progressing to uncover the factors that contribute to this deadly cycle.

The world’s leading experts in clinical and translational cardiovascular sciences serving on panels of the National Institutes of Health rate the research as very important. The NIH continues to fund this research because its scientists view Wayne State research data and peer-reviewed journal articles as valuable contributions to cardiovascular research. Only the top 10% of all NIH grants in this area are funded, so if the research was not productive and valuable, it would not continually receive competitive funding.

Often, science does not advance at the rate we would like. Progress is made gradually – and often painstakingly – over years. Just as scientists haven’t given up on cancer research even though they haven’t found a cure, we believe that this cardiovascular research must continue.

Wayne State is committed to the responsible and ethical use of animals in research, but also recognizes the benefits of research involving animals. Animal research has played a vital role in virtually every major medical advancement of the last century – for human and animal health. From antibiotics to blood transfusions, from dialysis to chemotherapy, to bypass surgery and joint replacement, virtually every current therapy for the prevention, treatment, cure and control of disease, pain and of suffering are based on knowledge gained through animal research.

The university strictly adheres to the policy of using only the number of animals reasonably necessary, minimizing discomfort and distress, and using alternatives whenever possible.