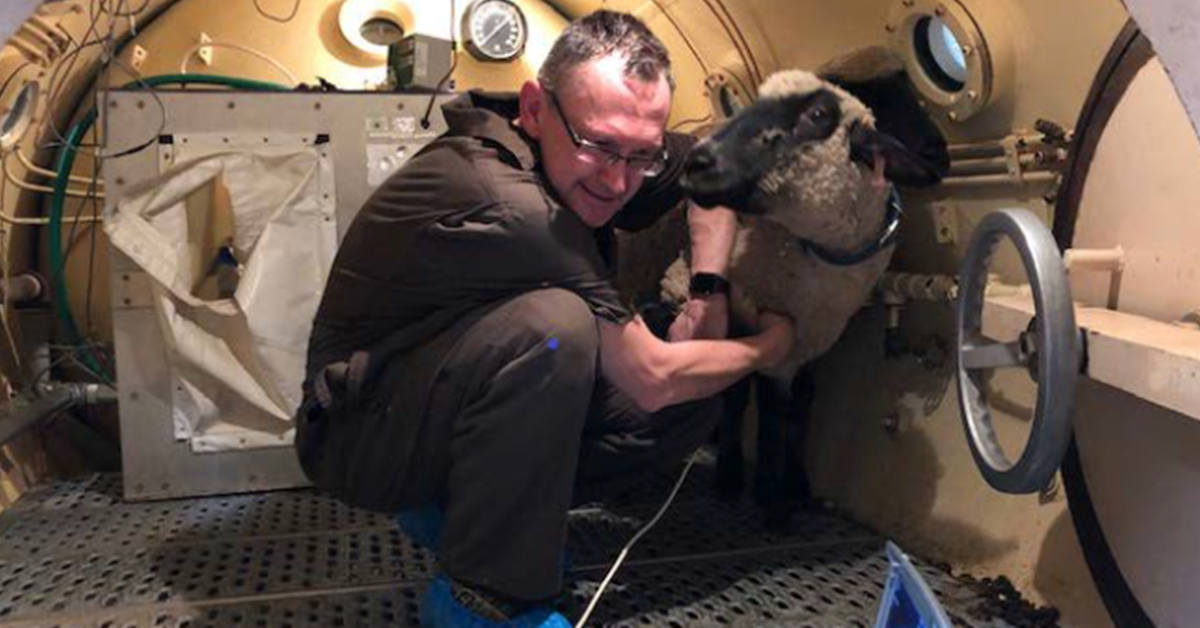 PETA has already caught the Navy conducting these types of experiments. In 2010, the Navy withdrew its funding for DCS/DCI experiments conducted at the University of Wisconsin-Madison as a direct result of a criminal investigation launched in response to a petition filed by PETA and Alliance for Animals. Special Prosecutor David A. Geier, appointed by Dane County Circuit Court Judge Amy Smith, who was overseeing the case, wrote the following at the time:

[T]he actions of the petitioners have called into question the need for further research into decompression. The Navy Department withdrew its grant and research using the sheep was stopped. … There is no doubt that the animal suffers during the period from leaving the chamber until the final injection to euthanize the animal.

However, it appears that the Navy has recently resumed its raw testing program.

Foreign navies have ended decompression tests on animals
Continued animal experiments like these make the Navy an outlier among the navies of our peer nations. France and the United Kingdom have already abandoned their respective naval DCS/DCI animal experimentation programs. In 2008, Derek Twigg – who at the time was UK Parliamentary Under-Secretary of State in the Ministry of Defense – wrote the following to Parliament:

The Ministry of Defense (MoD) today announced the end of its immediate requirement for live goat testing as part of its hyperbaric research in support of the Underwater Escape Rescue and Abandonment System of the MoD.

Animal testing is useless
It is obvious that sheep, mice and rats are not miniature humans. Major anatomical and physiological differences between the species render the results obtained by these experiments useless for humans, and the brass of the navy have even admitted this. In 2010, Dr. Wayman W. Cheatham, director of the Navy Medical Research Center at the time, wrote this to PETA:

The impact of physiological differences between species with respect to disease processes…is well recognized throughout the medical research community.

The Naval Medical Research Center itself has publicly acknowledged the inherent limitations of using animals to predict the effects of DCS/DCI in humans, stating that “animal DCS is in many cases more severe than that in human and, therefore, looks “different” from the average human case. Other experts agree. “The problem with these animal experiments is that no animal model can replicate what happens in humans,” said dive expert John Lippmann.

Animal-free research methods exist
In vitro studies and reanalysis of existing data on human divers have already yielded promising results directly applicable to humans under diving conditions. Machine learning techniques can also help predict symptoms such as seizures during hyperbaric oxygen therapy, and modeling can also improve the performance of dive computers to equip divers to avoid DCS/DCI . Animals do not need to die to improve human health.

what you can do
Please urge the Navy and the US Department of Defense to adhere to international standards and stop these deadly and unnecessary DCS/DCI tests in favor of superior, human-relevant, non-animal research methods.