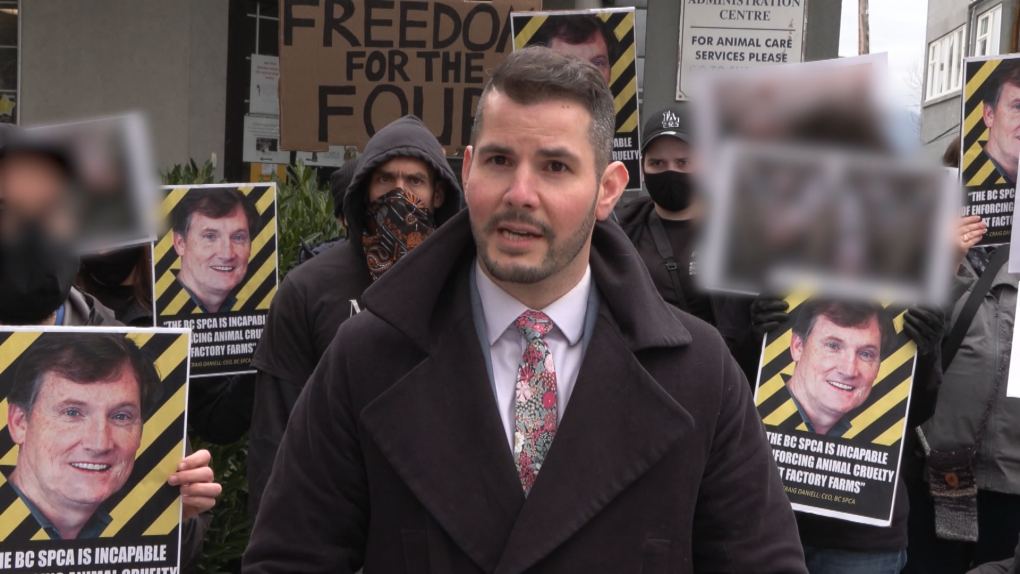 Animal rights activists occupied the BC SCPA headquarters in East Vancouver on Friday, calling for changes to the way cruelty investigations are conducted in the province.

Protesters entered the building around 9 a.m. and vowed to stay there all weekend.

Speaking to reporters outside, activist Jordan Reichert noted that the SPCA – an organization funded entirely by charitable donations – is solely responsible for investigating animal abuse, whether in the homes of people or in the factory farming industry.

“We are here today to call on the BC SCPA to step back from its law enforcement duties and allow a more competent, publicly funded and accountable government agency to take over. “, said Reichert.

“No other public law in the province or in Canada is enforced by a private charity.”

There are about 6,000 livestock farms in the province, and protesters want to see more surveillance at each of them.

Animal rights activists have particularly expressed disappointment at the lack of charges brought against Excelsior Hog Farm in Abbotsford, despite the release of disturbing video allegedly captured at the property in 2019.

The only subsequent charges were brought against a group of partisan activists dubbed the “Excelsior Four”, who face charges of mischief and breaking and entering.

“The system in place to protect these animals continues to fail them in the worst way possible,” Reichert said.

The SPCA told CTV News that staff greeted protesters in the office on Friday morning and showed them how to access the restroom.

Spokeswoman Lorie Chortyk said she believes activists’ values ​​are more closely aligned with those of the SPCA than they realize. The organization has also called for increased monitoring of farms, by both government and industry, including the use of 24-hour CCTV that is accessible and audited by a third party.

“It’s sad because obviously people can have whatever opinion they want – everyone is entitled to it – but I think we would achieve a lot more by working together,” Chortyk said of the protesters.

Chortyk argued that no single agency would be able to consistently monitor thousands of farms.

When it comes to investigating reports of abuse, she said the SPCA, whose officers are sworn in under the Police Act, has all the resources it needs.

“We respond to and investigate all complaints we receive, including on commercial farms. We conducted almost 10,000 investigations last year,” she said.

Chortyk also noted that officers visited Excelsior Hog Farms multiple times to check on the condition of the animals after the video was released nearly three years ago.

“The reason we couldn’t move forward with Crown counsel is that when we conducted our investigation, there were no signs of distress,” he said. she stated. “Unfortunately, because the video was not obtained legally, it would not be admissible in court.”

CTV News contacted the Department of Agriculture, which released a statement calling animal welfare a priority for the government.

“The department has engaged in dialogue with the BC SPCA, BC Agriculture Council and specific commodity organizations to support the development of a fair inspection system that all parties can understand and support,” the statement said.

The ministry also noted that the province had previously adopted the National Council for the Care of Farm Animals Codes of Practice, which cover animal handling, housing, health and welfare management.