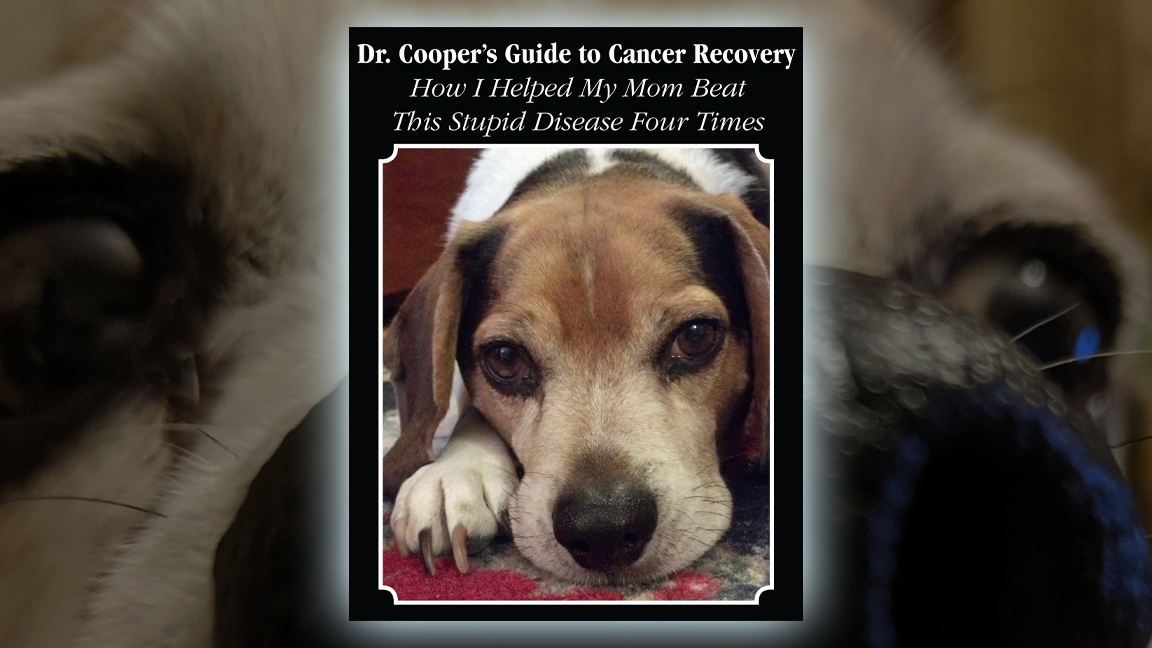 A four-time cancer survivor — and former longtime executive director of the Living Proof Exhibit — she recently won a Quad City Arts Fellowship to channel her experiences into a self-published book, “Dr. Cooper’s Guide to Curing Cancer: how i helped my mother beat this stupid disease four times.”

Although Crouch’s “Doggie Howser” obviously didn’t go to medical school or know how to write, his 15-year-old beagle played a vital role in his cancer treatment and recovery.

“It was just a combination of humor and love of a dog, it kind of started to come to my mind,” Crouch said of making a book full of photos, written from Cooper’s point of view. “It’s a book you can use if you’re going through chemotherapy and have family members and children. It’s universal.

A seasoned photographer, in 2018 she featured a photo of Cooper in the Living Proof “A Visualization of Hope” exhibition of cancer survivors at the Figge Art Museum. “So many people have come up to me saying how much they love the picture because their pet has helped them through the cancer journey.”

In 2010, Crouch co-founded Living Proof (which offers free programs providing treatment benefits to those affected by cancer), following her first diagnosis of breast cancer in 2008. She served as its first executive director until last October. .

After Crouch’s first cancer, and she lost her hair, it was discovered on her head that she had skin cancer. In 2018, she was diagnosed with ovarian cancer and her breast cancer returned in 2019. She is now in remission.

In a summary of her new book (for the $2,264 Quad City Arts Fellowship she won), Crouch wrote as Cooper:

“I didn’t really understand why she was so sick and couldn’t take me for long walks. I knew she loved me and I loved her, so I stayed by her side until she felt better. His first two cancers followed one another. I thought she was very smart to put them together so that the medicine could work on both at the same time.

“We lived a happy life for a long time. It was filled with long walks, treats and hugs,” the mother’s best friend wrote. “Then mum had cancer again in 2018 and there were fewer long walks. Then the walks started again! Then mom had another cancer in 2019, and our long walks stopped for a while. I decided that if we couldn’t talk about long walks, I should write a book. Mom hit it because I don’t have a thumb.

How a Dog Helps Heal

Apart from just company, Cooper has been invaluable as Crouch deals with lymphoedema, a troublesome side effect of cancer – swelling in the leg or arm, due to blockage of the lymphatic system, which is part of the immune system.

“When I have a flare, he’s been known to stand up and lay his head down, kind of like on my chest between my chest and my arm, where lymphedema is always the worst,” she said. . “He’s going to snuggle up there. And when I have a flare, that’s the only time he does that. Again, it’s brilliant.

“When I’m feeling good, he doesn’t do that,” said Crouch (who works on the development team at the Figge Art Museum), noting that Cooper taught him life lessons as well.

“The best thing you learn from your dog is to be present, to be in the moment — to be excited,” she said. “He can find joy in just about anything and he’s always in the moment. And I think those are really important, especially when you’re going through treatment and I’ve been battling cancer for 14 years now. It can be overwhelming, so just being around an animal, being around your best friend, your dog friend. It’s just teaching you to be in the moment and enjoy the moment that’s there. I think that’s an invaluable lesson.

It wasn’t difficult for Crouch to put the text of the book into Cooper’s voice.

“Because we talk with his voice all the time,” she said. “Anyone who has a cat, a dog or a rabbit. I do not know. We have always given it a voice. And my husband Chris does the same. So he gives Cooper a voice.

“It was pretty easy,” Crouch said, adding that she spoke to Midwest Writing Center executive director Ryan Collins about posting her thoughts on the page.

“He was incredibly encouraging. So it’s just one of those things – we start fumbling around and jotting down ideas. And then it just started to fall into place, when I allowed myself to get into my own creativity again,” she said. “And it has been wonderful. It’s just, it’s a lot of fun.

Writing is also part of recovery

Like Living Proof Exhibit has helped so many others to be creative in coping with cancer and finding a cure, the new book also helps Crouch recover, grow and persevere.

“The arts have always been there for me,” she said. “Before cancer, I was doing theater and vocal music. I always kept – every time, I always come back to the arts. It’s either the visual arts or the written word. I garden — I create in my garden. I don’t do as many performances.

Through writing and photography, it really helped her find a new lease of life and adopt a fresh and healthy attitude. (Cooper would say, “A new leash on life.”)

“I think it’s really helped me connect with myself. A lot of people keep a journal and I’ve never been a journalist, but just being able to go out and paint, go out and create something and now write more and putting those thoughts together really helps,” Crouch said.

The book is not so much about his 14-year journey as what cancer does to someone.

“From a dog’s perspective, being gassy from chemotherapy is heaven,” Crouch said. “But for a human, to explain to other humans, it’s a side effect and it can be embarrassing. The book tries to say, Mom is really tired. I love naps. Mom doesn’t have hair; Mom has to have radiation therapy. And so some of the things that are going on, that I’ve had surgery, that I’ve had tubes coming out of me.

“I address some of them in his voice,” she said. “It also helps people identify, these are some of the things that happen just because you have cancer, but they’re addressed in a cute vehicle. Hope this helps people have conversations.

“I approach this book with a dog’s voice,” Crouch said, noting that it’s also a great way to tackle heavy subject matter with a light, approachable touch.

“I want to keep some humor in all of this. I really avoid the anxiety that comes with cancer,” she said. “On each page there will be a photo, then a simple comment and a simple hashtag. I just want this to be kind of something that identifies some of what happens when you go through cancer, but it’s not a heavy book at all. I hope it’s crazy and amusing.

Crouch hopes kids can learn from it and relate to it, whether it’s cancer or a health issue.

“Whether they deal with it or a parent does, then they’re going to be like oh, Cooper’s mom was really tired,” she said. “My mum is very tired too, I’m just going to play quietly, or I’m going to take a nap. Cooper’s mother had to undergo chemotherapy and she didn’t like to eat. You know, my mom doesn’t really like to eat either. So I hope everyone can just look at it and say, I’m able to relate to it.

Crouch is working with Terry Van Winkle and Davenport Printing to layout and print the 32-page book.

“This is a shout out to everyone who continues to support people who communicate through the arts,” Crouch said, noting that Quad City Arts supports many area artists financially.

She wants it done as soon as possible, to get the book to local cancer centers and for Gilda’s Club chemo bags for people in treatment.

Quad City Arts’ Arts Dollars – which recently announced approximately $140,000 in 2022 grants – is supported by the Hubbell-Waterman Foundation and the Illinois Arts Council Agency.