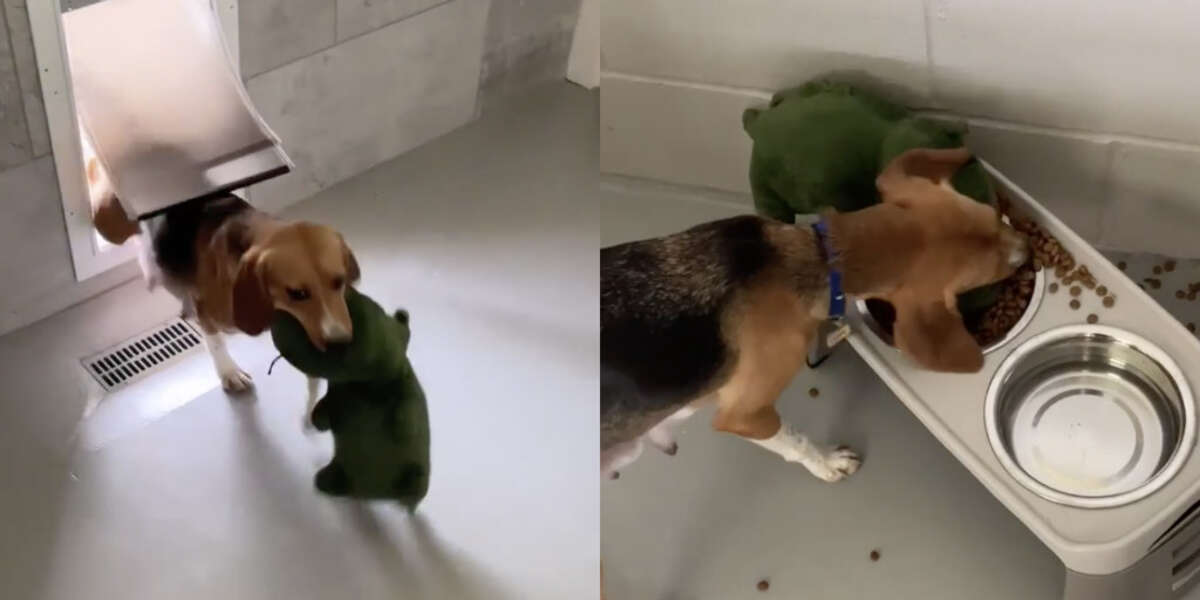 The world was shocked after 4,000 beagles were rescued from research organization Envigo. Now they are all settling into their new lives and finally starting to relax and be dogs.

Dory was one of the dogs rescued from the Envigo breeding facility and was taken in by Triangle Beagle Rescue along with 128 others. She arrived with her eight puppies and was very focused on taking care of them. Her rescuers quickly realized that being a mother was the only life she had ever known.

“At 3 years old, in a facility that used her to make babies, Dory didn’t really know how to ‘dog,'” Amy Adams, Dory’s adoptive mother, told The Dodo. “She is focused on caring for these babies. I look forward to her being released from this job and being able to become a playful girl and housemate.

As Dory settles into her foster home, her foster family tries to help her learn to be a dog. After stealing a ball of yarn from the dryer and starting to play with it, her adoptive mother decided to give her her own toys. Almost immediately, Dory fell in love with a stuffed green alligator toy and refused to put it down.

Dory started bringing her new alligator toy with her everywhere – and when it was time to eat, she brought her new toy with her and tried to enjoy her food without putting it down.

Since Dory had never had toys before, she couldn’t understand why she couldn’t eat and play with her toy at the same time. She’s still learning, but luckily the learning process has been super smooth and absolutely adorable, and her foster family loves to see her come out of her shell more and more every day.

“She’s a sweet, cozy and calm girl, but so playful and full of energy,” Adams said. “His tail won’t stop wagging.”

Dory is still obsessed with her toy alligator and brings it and other toys everywhere she goes, and looks forward to playing with even more toys as her new life continues.

Dory isn’t quite ready to be adopted, but once she is, the rescue already has a long list of people willing to adopt one of the Envigo beagles. Soon she will relax in her forever home and just have to focus on playing and just being a dog for the rest of her life.

“She’s such a sweet, loving girl,” Adams said. “I hope she ends up with someone she can spend her days with and who lets her play!”

Envigo beagles already have many potential adopters lined up, but if you’re interested in adopting, you can check out the other dogs available at Triangle Beagle Rescue.

We may earn a commission if you purchase from our links.

We may earn a commission if you purchase from our links.