Research station researcher in search of a more water-efficient chicken 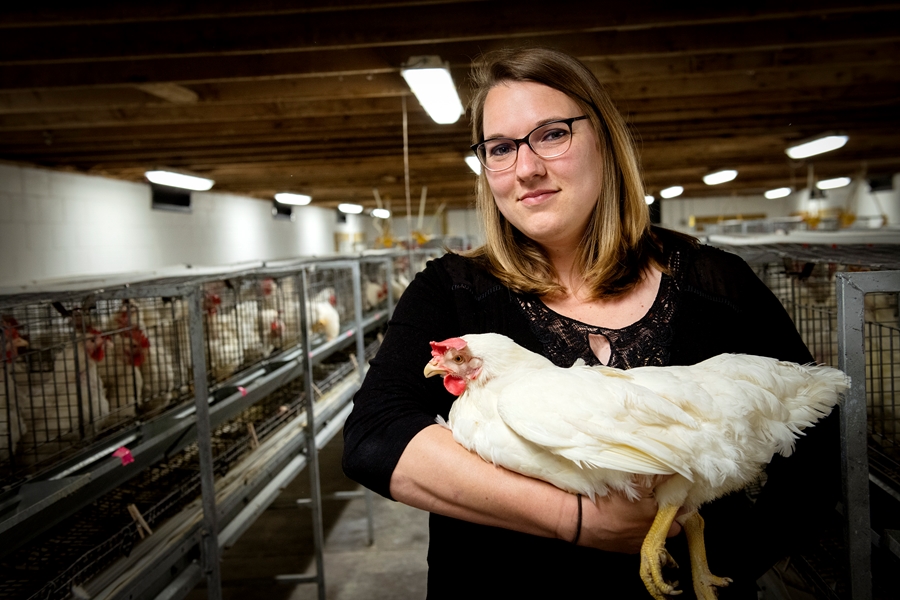 FAYETTEVILLE, Ark. – In a world of dwindling freshwater resources for a growing human population, where do you find enough moisture to grow food? You could start by improving water use efficiency in the world’s first farmed animal: chickens.

Sara Orlowski, an assistant professor of poultry science, is working on developing chickens that can thrive with limited water.

His research is part of a five-year, multi-institutional project funded by a $9.9 million grant from the National Institute of Food and Agriculture of the United States Department of Agriculture. The grant was awarded under the NIFA Food and Agriculture Research Initiative. Walter Bottje, a professor of poultry science at the Arkansas Agricultural Experiment Station, the research arm of the University of Arkansas Farming System Division, is the project director.

The project, “Empowering the U.S. Broiler Industry for Transformation and Sustainability,” partners the U of A System’s agriculture division with Cornell University and brings together diverse research expertise from at least five other university systems to improve nutrient and water use efficiency in the US poultry industry.

Orlowski has appointments at the Agricultural Experiment Station, Arkansas Cooperative Extension Service, and Dale Bumpers College of Agricultural, Food and Life Sciences. Her project is also supported by a grant from Cobb-Vantress Inc., a Siloam Springs-based primary broiler company.

According to a United Nations report (https://bit.ly/UN-WaterScarcity), about 4 billion people, or about two-thirds of the world’s population, experience a shortage of fresh water for at least a month each year. . The report indicates that the pressure on drinking water will increase significantly as the population reaches around 9.7 billion people by 2050 (https://bit.ly/3yvWYvl).

A growing population will lead to an increased demand for protein at the same time that freshwater resources are diminishing. Orlowski’s goal is to develop chickens that consume less water without reducing weight gain.

Orlowski begins the fourth generation of genetic selection for two groups. It raises one group for higher water efficiency and another for lower water efficiency. “We’re going in opposite directions,” she said. A third group is randomly bred to serve as a control group.

“In the first group, we select for a better water conversion rate,” she said. “How much water do they drink for a pound of gain? So far, body weight gain has remained constant. There has been no impact on feed conversion.”

The group selected for low water efficiency consumed more water without any improvement in weight gain, she said.

“Sara has developed a nice convergence,” Bottje said. “After three generations of broilers selected for higher or lower water conversion, its random breed control population is right in the middle.”

“I want to see if we’re losing anything in return for water use efficiencies,” Orlowski said.

She will study how birds use water to determine what gives the most efficient water users their advantage. And it will assess whether environmental conditions alter efficiency levels. “What are the effects of heat stress, for example,” she said.

Bottje said Shawna Weimer, assistant professor of animal science and director of the Agricultural Experiment Center for Food Animal Welfare, will be involved in these animal welfare and behavior related investigations.

Orlowski’s work on this project began while she was still a doctoral student. student while working as a research associate in the poultry science department. Before she could select water efficiency, she needed to be able to measure how much water each bird consumed. Bottje noted that it is very difficult to accurately measure water consumption in low-flow systems, such as those used to provide water to poultry.

Orlowski was part of a graduate student research team that developed a new low-flow water monitoring system for use with poultry. This gave him an essential tool that allows him to measure the water consumption of each bird in real time.

Bottje said this is the first time he knows of anyone looking to improve water use efficiency in poultry. “It’s really exciting to watch that,” he said. “It will be interesting to see where this leads.”