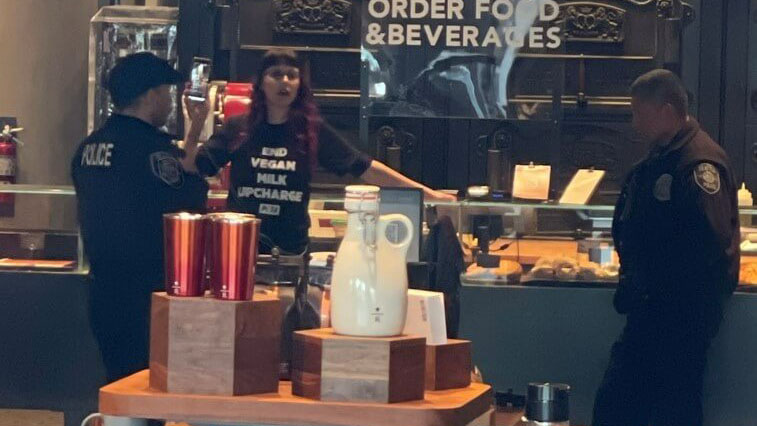 (NEXSTAR) — Two activists were arrested Wednesday after sticking their hands on the coffee counters of a Starbucks in Seattle.

The pair were part of a group of protesters who entered Starbucks’ headquarters cafe in Seattle to protest the chain’s practice of charging extra fees for customers requesting milk alternatives.

“Save the planet, save the cows, stop vegan recharging now!” the activists shouted after heading for the counter, as seen in video streamed live on Facebook by PETA.

“This week, before Earth Day, Starbucks is failing customers and the climate,” shouts one of the protesters in the middle of the store. “We’re headed for climate catastrophe, and Starbucks is still charging up to 80 cents extra for people to get the vegan milk, a sustainable option.”

The duo remained glued to separate counters inside the Starbucks for less than two hours before officers peeled their hands off. A PETA representative says the two have been charged with stealing services and destroying property, but a spokesperson for the Seattle Police Department said no one was arrested or charged at the scene. The two activists were arrested but released after questioning and identification, the police spokesperson told Nexstar.

No representative from the prosecutor’s office was immediately available to confirm the charges against the protesters.

Coffee and cars at MidCity Sunday – all for a good cause

Starbucks also responded to Wednesday’s incident, telling Nexstar that the company respects “the right of our customers to respectfully express their opinions as long as it does not disrupt our store operations.”

“My friends at PETA are campaigning to make this happen…I sincerely hope that for the future of the planet and animal welfare, you will be able to implement this policy,” McCartney wrote in the letter. , in part.

PETA has long campaigned against Starbucks’ plant milk surcharge, arguing that it not only helps support dairy farmers, but unfairly discriminates against vegan customers. Also affected are lactose-intolerant customers, “most of whom are people of color,” PETA previously said.

Starbucks itself acknowledged in November 2021 that “dairy is the biggest contributor to Starbucks’ carbon footprint.” At the time, Starbucks said it was working on new approaches to sourcing sustainable dairy products, but announced no plans to reduce dairy offerings or make them more affordable for customers asking for non-food options. dairy.

Starbucks locations in the United States currently charge an additional fee to customize their beverages with non-dairy milk. A “splash” of the same non-dairy milk can be added to some coffee drinks for free, says Starbucks.