The metabolomics platform continues to grow while pushing scientific boundaries 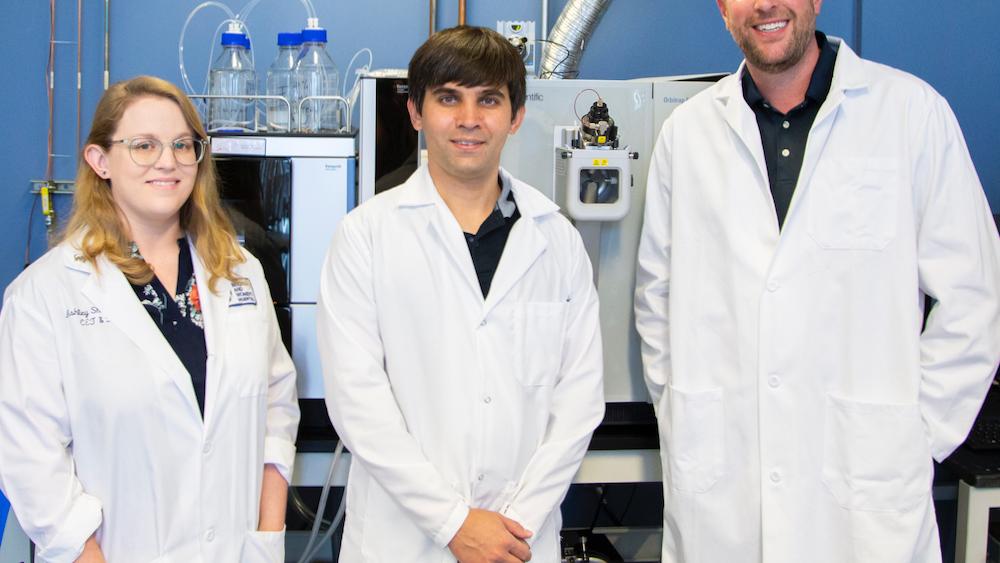 UNIVERSITY PARK, Pennsylvania –– Established nearly a decade ago, the Penn State Center for Metabolomics is housed in the Huck Institutes of Life Sciences on the University Park campus. The main objective of the facility is to identify and quantify small molecules (or metabolites) in biofluids, cells and plant and animal tissues. In addition, researchers at the facility perform proton nuclear magnetic resonance (1 NMR) spectroscopy to determine the structure of organic compounds and analyze samples containing protons.

Metabolites can be defined as endogenous compounds such as amino acids, lipids, sugars, and organic acids, among others. This could include compounds found in food, the microbiome, and those in the environment (the exposome). In the study of metabolomics, mass spectrometry is often used, in order to detect and quantify several thousand metabolites simultaneously. The measurement and comparison of a large number of metabolites present in biological samples can provide insight into the underlying biological processes involved in their production.

“A substantial investment from Penn State – the Huck Institutes, Eberly College of Science, College of Agricultural Sciences, and Penn State Cancer Institute – along with the dedication and hard work of the institution’s former director, Dr. Philip Smith, have helped create a truly impressive and unique environment for conducting transdisciplinary research in metabolomics,” said Patterson, adding, “The growth of metabolomics at Penn State has been fostered by incredible graduate students and postdoctoral fellows, as well as by supportive and committed teachers.

In May 2022, Ashley Shay came on board as the new director of the Metabolomics Core Facility. She said she hopes to expand the facility’s capacity and bring more collaborations within Penn State and beyond. Shay earned her doctorate in molecular medicine at Penn State in 2017 and returned to work at the university partly because it was a supportive environment, she said, and partly because her diverse scientific background encouraged at Penn State, fits the facility perfectly.

Shay’s research interests lie in the implementation and expansion of liquid chromatography and tandem mass spectrometry to determine the chemical structure of novel lipid mediators (secreted by multiple cell types involved in inflammatory processes) and metabolites in inflammatory diseases. She also uses “in vitro” and “in vivo” approaches to determine their functions.

“Mass spectrometry is a very versatile and powerful tool that can be implemented across multiple scientific disciplines,” Shay said. “The facility is currently working on many projects that include testing samples ranging from fungi to human tissue and everything in between.”

Currently, there are two full-time research professors at the Metabolomics Core Facility. The machines can operate 24/7, and Shay, along with assistant research professor Sergei Koshkin, is responsible for the health and safety of the lab and its equipment around the clock.

Koshkin brought his enthusiasm for doing great science to the facility in early 2022 after leaving Russia. He specializes in the development and application of mass spectrometry methods to analyze biomolecules in living systems. He is also interested in the identification of prognostic, diagnostic and predictive biomarkers and in the search for mechanisms and regulations of normal and pathogenic processes in these systems.

“Modern mass spectrometry is very fast and sensitive. It can help provide answers to complex problems by providing large and diverse data sets,” Koshkin said. “Sometimes researchers have very broad questions at the start and giving them all that data can sometimes help narrow the scope of their work.”

Koshkin received his M.Sc. and Ph.D. in Chemistry from Kazan Federal University, Russia in 2010 and 2015, respectively. After completing his doctorate, he continued at Kazan Federal University as a technician, director of engineering for research and development, researcher and senior researcher. He also worked as head of the mass spectrometry analysis center at the Federal Health Care Surveillance Service, the Russian equivalent of the FDA. [U.S. Food and Drug Administration]from 2020 to 2022. His work has been published in more than 22 academic journals.

“I am thrilled to be at Penn State and look forward to expanding the scope of mass spectrometry work at the University,” Koshkin remarked.

Shay, who worked as a researcher, instructor and senior director of mass spectrometry for the Center of Experimental Therapeutics and Reperfusion Injury at Harvard Medical School, has been published in more than 15 academic journals and has filed a provisional patent application with collaborators. She says that in the future, she would like to increase the visibility of the facility and generate interest in learning about mass spectrometry.

The Vanquish HPLC system is currently the most advanced liquid chromatography instrument available. These new instruments, along with others currently in the central facility, can be used by Penn State faculty, staff, and students, even if they are already engaged in a project at another central facility. A cornerstone of the Penn State research community is collaboration and this extends to include core facilities, but research groups may not be aware that multiple facilities can be used to further explore their samples.

“Something that I think research groups underutilize is the potential for interactions between core facilities.” Shay said. “For example, you can have cell lines cultured by Sartorius’ cell culture facility and then send them to the proteomics and genomics hubs to get rich datasets that provide a more complete picture of your scientific question.”

About the Huck Institutes Core Facilities at Penn State

The principal facility directors and staff of the Huck Institutes are world-class research faculty with outstanding academic credentials, expert instrumentation proficiency, and up-to-date knowledge of scholarship in their fields. Huck’s facilities provide services to more than 300 research groups each year and are available to researchers at Penn State and outside the university. To learn more about the main facilities and watch a video tour, visit the website.