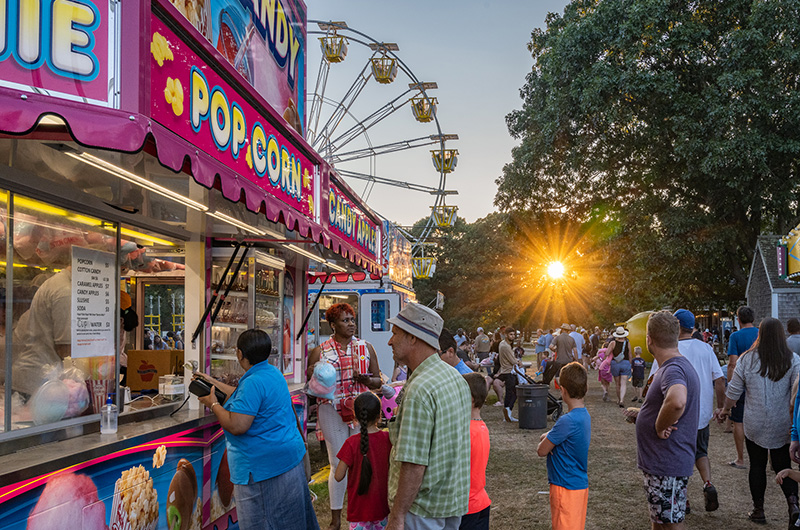 West Tisbury was the perfect location for the 160th annual Martha’s Vineyard Agricultural Society Fair, where a mix of old and new entertained the crowds from August 18-21. More than 40,000 people took part in the summer tradition over its four days.

“It’s the biggest party on the island,” said Agricultural Society President Brian Athearn. “It went off without a hitch.”

Here are highlights from the Gazette’s reporters and editors:

This year saw the advent of a new fairground technology. iPads in kiosks have replaced the old ticket booths, handing out QR-coded wristbands with the electronic whirr of an airport parking machine. Cash reserves are no longer the necessity they once were; you can pay for your entrance with a credit card and buy your candy apple with ApplePay. (If you want to try your luck at darts, squirt gun racing, or frog racing, you’ll still need cash). Instead of trash cans, the Ag Society set up waste sorting stations, turning popcorn into compost and cans of soda into…well, no more cans of soda, I think. – Noah Glasgow

The fair reflects the values ​​of the island in many ways, and not just in the animals, special foods and handicrafts found there. The island-wide commitment to environmental sustainability and action on climate change was also very visible this year. Beneath each green tent bearing the Island Grown Initiative logo, gloved volunteers sorted food plates, cups and all debris into containers labeled landfill, compost and recycling. The result was a sobering depiction of where the trash goes. All around the fairgrounds, one could find Vineyard Conservation Society free water refill signs, as well as separate tents with huge jugs of bottled water that visitors could use to refill their own reusable bottles. . – Elizabeth Bennett 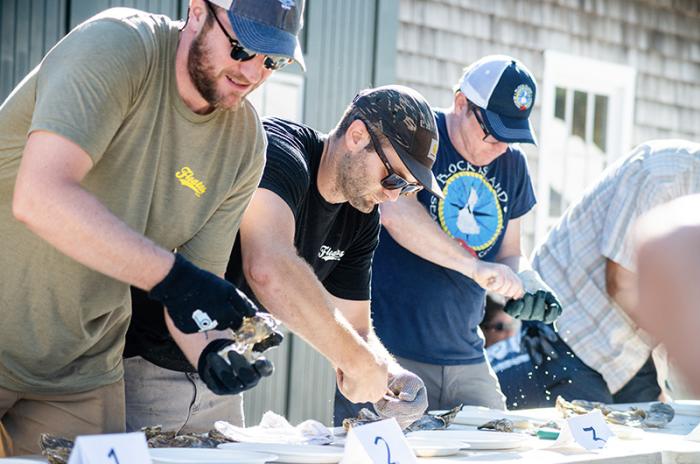 The musical tent kept shaded fairgoers and music lovers happy throughout the weekend, with sets from popular island bands including Johnny Hoy and the Bluefish, Mrs. Biskis and Mark and Molly.

Halfway through, cries of excitement came from above as visitors soared aboard carnival attractions like Cliff Hanger, which carried riders in the classic Superman position, or Moby Dick, with his graffiti-style white whale staring angrily at the passengers. as they rose and fell and laughed.

Higher still, the Ferris wheel spun its gondolas in the sky above the treetops for sweeping views of the fairgrounds below and the island beyond, before dragging riders back into the heat and dust of the earth.

On Saturday, most lines moved quickly. The Round Up operator obligingly made the trip for just three teenage girls, who strapped themselves into equidistant positions around the ring before it began to spin and rise, pressing them against its walls with centrifugal force . – Louisa Hufstader

The animal barn drew a steady stream of visitors to stalls with piglets, goats, cows with their calves and other animals raised on the island, many with colorful hand-drawn information cards by children. There were more drawings in the chicken cages. Following outbreaks of bird flu off the island, the fair banned live birds this year, inviting young chicken farmers to imagine their poultry instead.

More works of art – from fashion design and couture to sculpture, photography and painting – were displayed in the showroom. The Athearn family of Chilmark have collected ribbons in a variety of categories. Zeb Athearn, 13, earned a blue in the junior division for his Greek weapon of war, a heavy crossbow that looked like it could take down a flying dragon.

The weapon has been tested, but needs further calibration after the fair, said her mother Meg Athearn.

Ms Athearn herself won a second-place ribbon for her homemade butter, which she made in a slightly untraditional way.

“He was tossed in a jar on the way to work,” she confessed.

Her husband Dan Athearn continued the family tradition of racking up blue ribbons for, among other things, a cow and calf raised on the family farm, while the couple’s nine-year-old daughter Penny won blue for a sculpture home-grown vegetables and grapes and his 16-year-old sister Clara won blue ribbons for a pie and a bug collection, and also played horseback riding with the Misty Meadows Equine Learning Center drill team.

After practicing in her mother’s yard the day before, Chloe Dahl tossed the regulation cast iron skillet to victory on Sunday afternoon, with her older sister Phoebe also putting in a respectable performance, their mother said.

Elder Ms Dahl was disqualified after an enthusiastic throw which left her off balance and above the toe line.- Louisa Hufstader

Concern for the environment was on the minds of local residents who created eye-catching displays with important messages. Sengekontacket’s friends built a mechanical shark out of plastic bottles, aluminum cans, sunscreen bottles and many other types of debris that washed up on the shores of the pond. A display made of nylon fishing net and proclaiming “Keep our ocean clean!” occupied half a wall of space in the lobby. The entry was created by children from First Light Preschool in Vineyard Haven and featured colorful fish and sea creatures caught in the net. This display in particular highlighted the fact that islanders are beginning to become aware of the fragile ecosystem of the vineyard from an early age. – Elizabeth Bennett

In comparison, other fairground traditions seem more rustic than ever. Saturday saw a myriad of demonstrations of lumberjack skills, such as the bow saw race, in which it takes competitors less than a minute to chew through a large pine beam. In the Garden Tractor Pull, competitors jump up and down on their miniature tractors in a desperate attempt to gain traction on the event’s smooth concrete racing terrain. – Noah Glasgow

On Sunday, with the fair in its final hours, the longest queue was for burgers and fries at the West Tisbury Firefighters Association stand, where a red and white light bar pulsated at the top of the stand and a bell rang each time a customer made an additional donation. – Louisa Hufstader

Volunteers from the West Tisbury Fire Department have also been set up in the fairground parking lot, where parking proceeds are split 50-50 between the agricultural society and the fire department’s scholarship fund. Aided by members of the Vineyard Hockey team (many of whom qualify for scholarships through their service), the firefighters kept traffic flowing and raised funds for their scholarship program, which notably follows its recipients throughout their college career, not just their freshman year. The keepers also showed mercy to a recent washshore whose replacement ATM card awaits him on his next trip to the mainland. Not unrelated: Donations to the scholarship fund can be made to the West Tisbury Firemen’s Civic Association, PO Box 211, West Tisbury MA 02575. – Brian Boyd

West Tisbury Police Chief Matt Mincone reported a smooth and safe weekend at the fair. There were no injuries or arrests, traffic was heavy but manageable and most lost and found items were recovered within an hour, Mr Mincone said.

“The whole thing was a good, safe family event,” Mr Mincone said. “Brian Athearn, who runs the whole agricultural society, he and I work together very well and I’m happy to say it was another great event.” – Zach Harris

“I’ve never been part of anything so special as working with the people who made it all happen,” Mr Athearn said the day after the fair. “Everyone shot 10 times their share and we had 10 times the fun.”

He described the fair as a fair of records thanks to the participation of a community eager to come together.

“Everyone was ready. Everyone needed it. We got it,” he said.