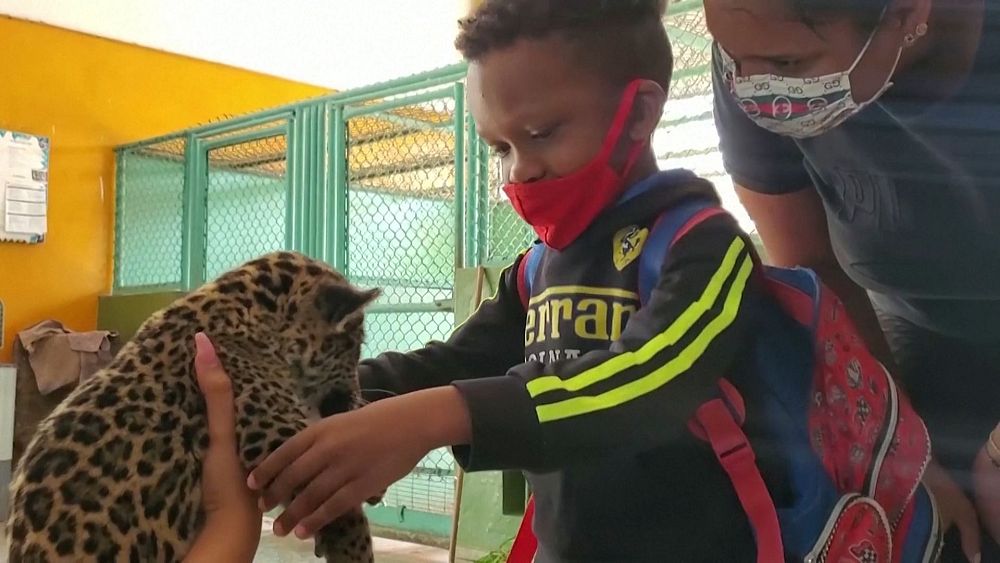 In Havana, the Parque Zoologico Nacional Zoo welcomes children with Down syndrome, autism and other special needs to pet jaguars and play with their paws, stroke the cool, moist skin of snakes and give milk to a zebu cow.

“Besides breaking down barriers of fear…it also encourages them to care for and protect the environment,” says Yaima Pueblas, zoo development director and animal therapy specialist.

Teachers and parents say the program has provided a bright spot for children during a particularly difficult time on the Caribbean island, which has been hit hard by the coronavirus pandemic.

“They gradually progressed at school,” explains Maraidis Ramirez, a specialist teacher. “They didn’t write; now they do the ‘a’, they write the ‘1’.”

Javier Lavaumena says the program has changed the direction of his son’s life. “We’ve seen great accomplishments with the kids…they’ve made a lot of changes in their lives, at school and at home. They’re going home with a different behavior,” he says.

What is the real use of animal-assisted therapy?

Zootherapy or pet therapy aims to improve physical and mental health. It has been used to teach children with autism how to communicate and relate and to bring seniors out of isolation and stimulate gross and fine motor skills.

While parents and teachers see children in Havana happier and more motivated, it is difficult to truly measure the actual clinical effects of animal-assisted therapies.

The majority of published studies indicate that therapy animals can have a limited but positive impact on a range of disorders. However, as a researcher Hal Herzog pointed out in Psychology Todaystudies that do not show positive results are almost never published.

While no one can deny that petting a dog or bonding with a horse can help reduce stress and anxiety, animal therapy has spread widely to other species. And while therapy dogs are specially trained to participate in therapy and deal with the stress that comes with it, wild animals could suffer lasting harm from being involved with humans on this level.

What about animal welfare?

“PETA opposes the use of any exotic animal in therapy programs,” the NGO told Euronews Green. They also shared some of the potential animal welfare violations that can occur during pet therapy.

“For example, monkeys, given to paraplegics, often have their teeth pulled, are sometimes made to wear electric shock collars, and are kept in cages and isolated when not in use, which is very upsetting. for intelligent and social creatures”, explains the NGO.

“Dolphin-assisted therapy, in which disabled people swim with dolphins, results in the imprisonment of wild dolphins in tiny tanks, where they are separated from their families while being forced to interact with humans. Dolphins captives often die well before their expected lifespan of 40 or 50 years in the wild.”

PETA finds that the program described at Cuba’s National Zoo likely results in serious animal welfare issues. In order for the public to interact with juvenile jaguars, for example, the cubs are taken from their mothers a few days after birth and given to humans to be hand-reared in an effort to habituate them to human contact. These vulnerable infants have weakened immune systems and being handled by groups of children exposes the little ones to disease, infection and injury.

The organization also points out that direct contact between members of the public and any exotic animal also puts the person at risk. Animals can become aggressive due to the stress they are under and they can also transmit diseases to humans.

Watch the video above to see how kids interact with animals at Cuba’s National Zoo.