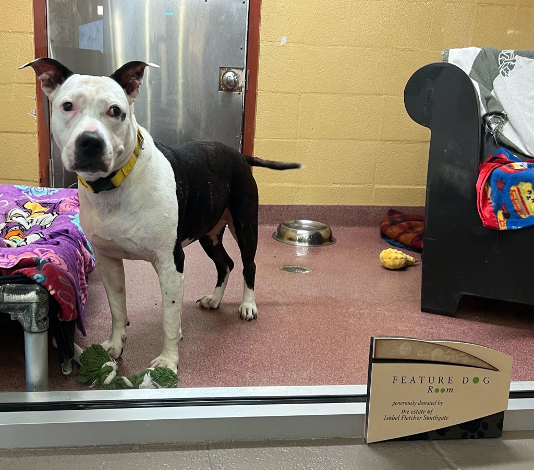 Hips shaking arthritically, Cassie slowly takes a seat next to her purple Daffy Duck bed, watching the eyes watching her from the other side of the glass. Frowning in a gesture of pity, a few tap the glass and subtly coo “what a good girl.” Cassie watches silently, acknowledging the attention with a soft, slow rustle of her tail. Cassie, an elderly dog, is waiting for him forever at home.

Cassie, the featured adoptable dog of the day, is one of hundreds of animals waiting for homes at the Asheville Humane Society. Unlike Cassie, many other dogs make their existence known loud and clear as soon as a car pulls into the parking lot. A chorus of barking and howling echoes from the buildings, reverberating through the nearby concrete structure.

While the Humane Society stands warm, wooden and welcoming, just 15 feet away, the Buncombe County Animal Shelter is gray, cold and concrete, pale in comparison. Despite the stark contrast, the shelter and human society work in tandem to save lives. Whether you are lost, homeless or abandoned, the journey to find a forever home starts here.

The shelter, designed like a puzzle with interconnecting hallways and layers of doors, houses the Wanderers’ Reception Center. The beige walls, lined with enclosures filled with cats and kittens, reflect the mewing and scratching of the residents welcoming a woman in blue and copper glasses. Donor relations director Laila Johnston, although less than a year in her role at the rescue, fits in as if she was there from the start.

Johnston, passing the wall cages and outdoor dog enclosures, happily greets each animal in his path. Meows and interposed barks aren’t the only accompaniment to Johnston’s footsteps as she makes her way through the maze of hallways. Volunteers tackle mountains of dirty towels and blankets, the swirl and roar of industrial-sized washing machines shake the floor just outside the laundry room. Dozens of red bins are overflowing with freshly laundered and folded blankets and beds. Medical supplies are organized in a clinic room and phone lines ring at the front desk.

“It’s not the quietest place in Asheville,” Johnston laughs, gesturing at the choir around her.

Ensuring the safety of everyone involved, each animal has its own space equipped with blankets and comfortable beds, simulating a home environment

“We try to find as many host families as possible. as proud as we are of it all. “Some people don’t understand why some dogs get grumpy and bark, but can you imagine living like that? Living next to a human and a human and a human.

As you walk through the two rows of dogs, your ears ring with the cacophony of deep, loud barking. Most of the dogs in this section of the shelter are mature, large and intimidating. While some bark excitedly and wag their tails as you pass, others rush towards the chain-link doors, growling and baring their teeth.

Johnston, passing members of their behavioral rehabilitation team, proudly recounts the hard work of the director of behavior and training. Any animal that comes to the shelter is assessed by this team for aggression, anxieties, behavioral issues, and the type of home that would be best for them.

“Ideally, we are looking for forever homes. Our director of this program, Pia Silvani, is internationally recognized for her work in this area,” said Johnston proudly. “She’s a bit of a big deal and we’re very lucky to have her.”

To minimize stress and mimic a home environment as much as possible, staff constantly maintain clean accommodation and clean blankets and beds. Johnston explained that they also enrich the animals by finding new ways to feed them, such as putting their meals in puzzle bowls or freezing their meals in popsicle shapes for dogs to separate.

Coming out of the shelter into the green lane, Human Society is 15 feet away. Passing the side wall, a stream of hot air blows into the path from a vent.

“I know, I love that smell,” Johnston replied emphatically.

Once at the back of the human society, the environment becomes much calmer and quieter. Some barking can be heard ahead but is muffled through the walls.

Johnston, checking on the adoption coordination team, turns around at a rooster crow in the hallway.

“We are free admission, so we take everything, and I mean everything,” she laughs, explaining that human society not only takes dogs and cats, but also pigs, cows, chickens, rabbits, lizards, etc.

“We even had an albino boa constrictor that was found at a gas station once,” she said, her eyes widening in shared surprise.

Just like in the nearby refuge, the staff bustle around human society, each with their dedicated task in hand. People come in and out of doors in all directions, some with animals in tow, others with supplies or paperwork.

Finally, Johnston arrives at the featured adoptable animal condos. The left is home to a trio of elderly working cats – Ford, Hawk and Sporty, and 10-year-old Cassie.

Some animals that manage to find homes here move to refuges up north.

“The North is about three decades ahead of the South in neutering and neutering initiatives, so they actually don’t have enough adoptable animals,” Johnston said. “We partner with them and send cats and dogs there.”

“There is currently a litter of three kittens in foster care,” Stephens said. “They’re picked up by a vet tomorrow and headed to Maine for adoption. They have a better chance of being adopted there.

Behind the featured condos, the youngest adoptable residents huddle in their spaces or prepare for encounters like 2-month-old Messoria. Messoria’s own encounter didn’t work out, but Johnston firmly believes it won’t be long before he finds his forever home.

Now in its 38th year, the Humane Society has grown from humble beginnings in a trailer and condemnable building. In March alone, more than 500 animals found their forever homes.

“15 years ago, Asheville Humane operated from a single-width trailer in Leicester before raising the $4 million to build,” said Joelle Warren, founder of Asheville Humane Society partner Mountain Pet Rescue. . “It’s been a long climb to get here.”