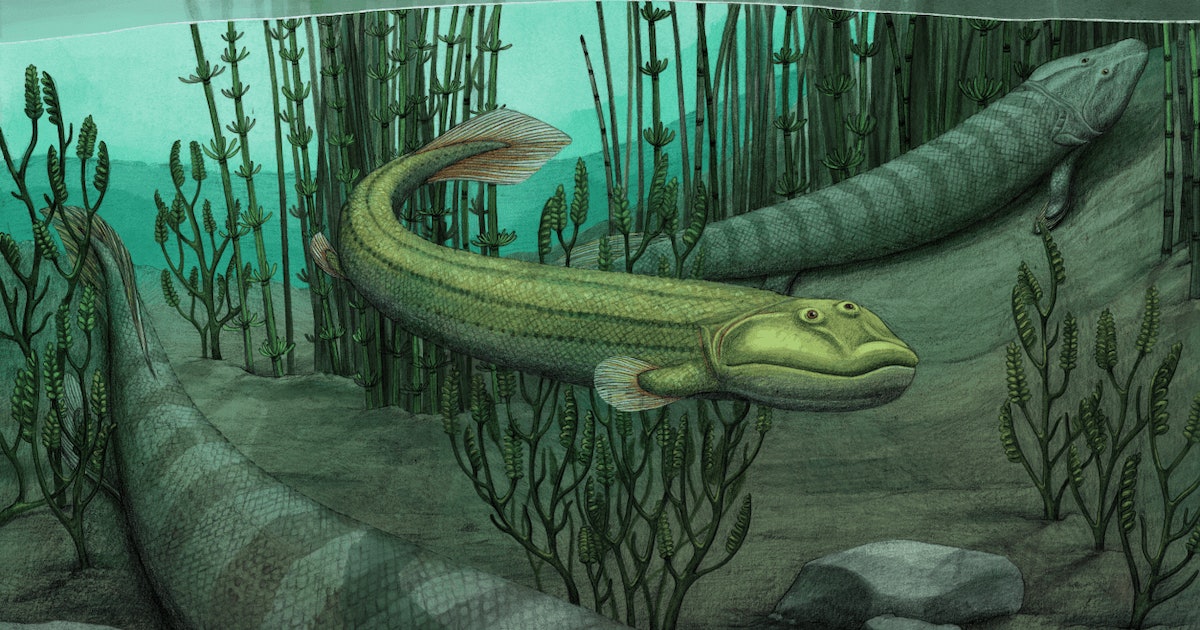 Some 385 million A few years ago, during the Upper Devonian period, a fish came out of the water to the shore in search of a new home. Its fins were strong enough for it to move on land. Thus began the history of terrestrial vertebrates.

Fast forward to 2004 in the Canadian Arctic Archipelago of Nunavut Territory, where researchers found two fossils about a kilometer apart. One was from a specimen later known as Tiktaalik roseae (pronounced tick-TA-lick). The other looked like a miner Tiktaalik, especially because of the appearance of his jaw. But nearly 20 years after its discovery, paleontologists suspected it was something else entirely.

Researchers from the University of Chicago and Drexel University recently published a study in the journal Nature in which they describe a new species of fish which may have preceded Tiktaalik.

What’s new – Researchers now believe the second fossil is from a new species of fish they call Qikiqtania wakei. Pronounced “kick-kiq-TA-nee-ah,” the specimen’s name comes from the area where the fossil was found in the Qikiqtaaluk region.

“It’s really rare to find an animal like this,” said co-writer Tom Stewart. Reverse. “It’s also exciting because some of the anatomy is unexpected.” He notes that part of the bone structure is very similar to our body. Stewart helped complete this research while at the University of Chicago as a postdoctoral researcher and is now a professor of biology at Penn State University.

According to Stewart, this fossil has large pectorals – or, at least, a beautifully preserved pectoral and humerus, analogous to our arm. The team had taken X-rays of the fossil using a CT scanner, which effectively allows them to see through the rock containing the fossil. This is how they found the fin, pectoral and all fully preserved.

But it wasn’t until 2020 that the team thought it might be a different species. “We spent many, many hours processing the entire skeleton and could say with great confidence, ‘Yes, this is something different,'” says Stewart.

Why is it important – Qikiqtania adds further nuance to how vertebrates changed and eventually became land animals.

“This fossil is exciting because it gives insight into the broader range of fish lifestyles at this part of vertebrate history,” Stewart said. The rarity of these fossils means any additions fill a gap in scientific knowledge about these fish.

Qikiqtania lacks other features characteristic of other fish of that time. For example, it had a large fin web to help control swimming. Fossils like Tiktaalik were more leaning on the ground on their fins either underwater or just at the edge of the water. “All of this together tells us that it was probably living a different lifestyle from something like Tiktaalik,” he says.

Dig into the details — Qikiqtania did not evolve into Tiktaalik, That is.

“It’s completely normal to have two closely related animals diverging from each other,” Stewart said. Reverse. “That doesn’t mean one comes from the other.”

This is where statistical tests called phylogenetic analyzes come in. Stewart says paleontologists interrogate a bunch of fossils, asking what anatomy, scales or skeletal features they share. By constructing and visualizing how these creatures relate to one another, experts can construct a phylogeny, or “the tree of life,” as Stewart puts it. In this first part of the tree of life, Qikiqtania is closely related to Tiktaalik as well as another Late Devonian fish fossil called Elpistostege watsoni.

As to why these fish changed their habitat, it is still a mystery. Stewart says these creatures could have been searching for more food or escaping predators, for example. The area was a floodplain, so capable fish could wriggle on dry land and then drive the floodwaters to a new pond.

And after – Qikiqtania belongs to the larger context of tetrapods, which Stewart intends to flesh out further by examining anatomy.

“I would say this is part of a larger body of studies trying to understand the biology, diversity, development and biomechanics of early tetrapods,” he says. “We have a new reconstruction of the post-cranial skeleton of Tiktaalik we are working on what we think is really helpful in understanding how he lived and how he would have moved,” he says. This reconstruction could help us understand how the vertebrae and ribs relate to the legs and other appendages.