Among thousands of impressions in a large rock surface, one stood out from the crowd. The imprint of a sturdy tubular exoskeleton topped with swaying tentacles, now frozen in time, looked surprisingly familiar, unlike any of its neighbors.

It looked like a relative of corals, anemones and jellyfish from a layer of sediment dated 20 million years before the existence of Cnidaria like these.

“It’s unlike anything else we found in the fossil record at the time,” says paleontologist Frankie Dunn of the University of Oxford’s Museum of Natural History.

“Most of the other fossils from this time have extinct body plans and it is unclear how they are related to living animals. This one clearly has a skeleton, with densely packed tentacles that would have wiggled around in water capturing passing food, much like corals and sea anemones do today.”

The discovery itself was made in 2007 when researchers from the British Geological Society removed debris from a slab of rock from the Bradgate Formation in Charnwood Forest, a well-known fossil site just outside Leicester.

The rock itself is already considered truly ancient, dating from around 557 to 562 million years ago. It was a time of truly strange creatures, long before the rich biodiversity of the Cambrian Explosion assembled the body plans we now know better.

The researchers took a cast of the textured rock for study. Among the thousands of prints depicting an assortment of ancient lifeforms, one seemed less foreign than the others. In fact, it looked a little too much like the life we ​​would see today.

Looking like something we might see scavenging a passing crustacean on a modern coral reef, the 20 centimeter long cnidarian now represents the earliest example of a predator.

“The ‘Cambrian Explosion’ was remarkable. It’s known as the moment when the anatomy of living animal groups was fixed for the next half billion years,” Dunn explained.

“Our finding shows that the body plan of cnidarians [corals; jellyfish; sea anemones, etc.] was repaired at least 20 million years before that, so it’s extremely exciting and raises a lot more questions.”

The Ediacaran period is notable for its sparse but strange, very alien fossils that bear no resemblance to anything currently living. The new discovery supports the theory that this period is also the dawn of modern animals. The seeds of at least one group of animals we know today were planted for the first time, just in time to really flourish and branch out during the prolific Cambrian era.

So Dunn and his colleagues named the genus of the fossilized animal Aurora, meaning dawn lantern for its resemblance to a lit torch. To the delight of Sir David Attenborough, who hunted nearby fossils as a child, they gave it the species name attenboroughii. 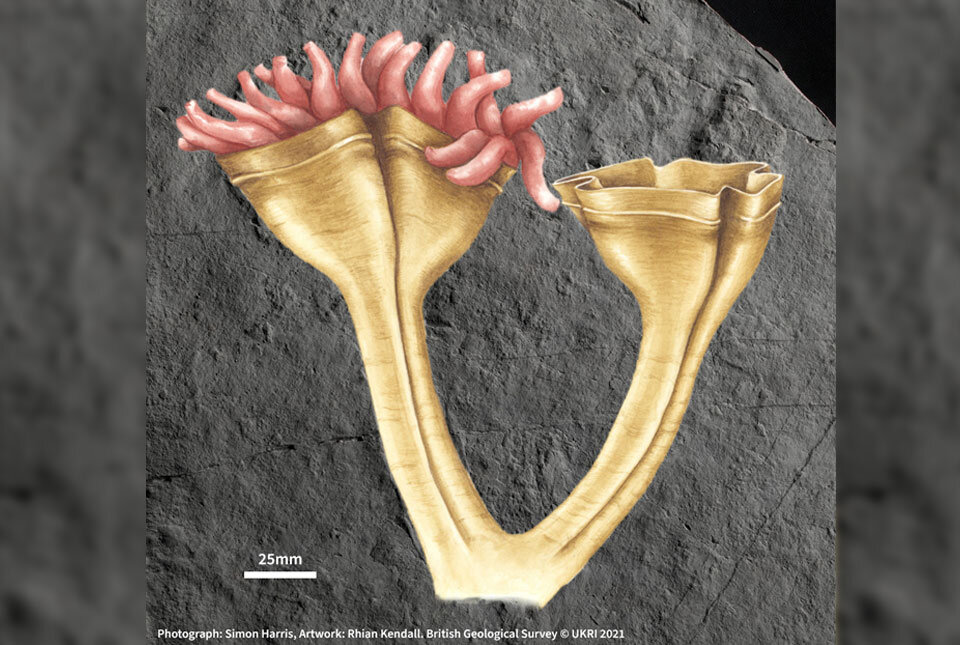 This strange but familiar creature shares common characteristics with early Cambrian cnidarians; however, unlike them, his sturdy exoskeleton is smooth rather than ornate.

“It’s the first creature we know of to have a skeleton,” Dunn explains. “So far we’ve only found one, but it’s hugely exciting to know that there must be more, holding the key to the beginning of complex life on Earth.”

Auroralumina attenboroughii’s The large size, compared to other known relatives, may mean it does not have the free-swimming jellyfish stage of its life cycle like jellyfish and corals do, the team suspects. Anemones don’t have this stage either – they are sessile animals that always get stuck in place.

Researchers believe this small, solitary predator may have been swept into deeper water from a shallower house on the side of a volcanic island by a deluge of volcanic ash. It sits at an odd angle to its neighbors in death, all of which were flattened and forever preserved in that direction when the flood struck.

This research was published in Nature ecology and evolution.