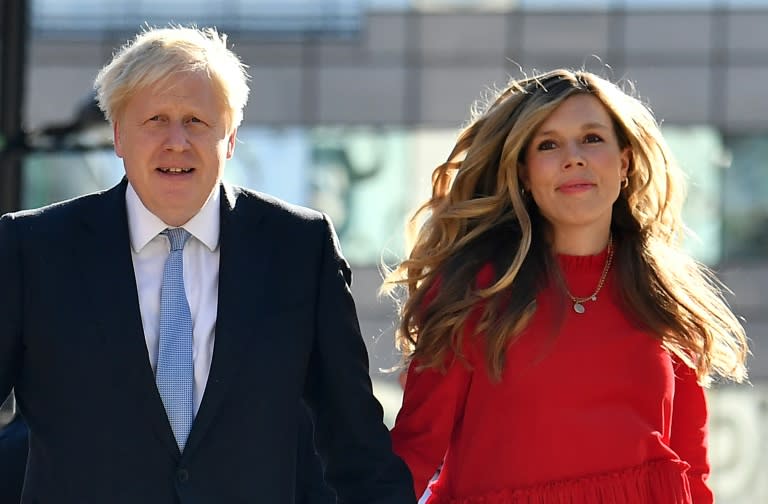 Carrie Johnson, the wife of the British Prime Minister, is a seasoned political operative in her own right who has been pushed from the shadows as allegations of villainy and scandal shroud Downing Street.

The 33-year-old former Conservative Party communications chief has kept a low public profile since Boris Johnson entered No 10 in 2019.

She has given no interviews and has only appeared alongside Johnson at high-profile events such as international summits and the annual Conservative conference last October.

But she has increasingly been accused of having too much sway over issues close to her heart – particularly the environment and animal rights – and over staff appointments.

Much of the offensive came from the prime minister’s embittered former chief aide, Dominic Cummings, and took on new prominence in a new biography by Michael Ashcroft.

“My book shows that Carrie’s behavior is preventing the Prime Minister from running Britain as effectively as the voters deserve,” Ashcroft, a former Tory vice-chairman, wrote last weekend.

Supporters say the charges smack of sexism, and Johnson’s political opponents say it is he and not his wife who should be held to account.

After the first installment of Ashcroft’s book was published in the Mail on Sunday newspaper, his spokeswoman dismissed the claims as part of a smear campaign against the couple by “bitter former officials”.

Carrie Johnson, she said, was a “private person who plays no part in government.”

More recently, the Johnsons have been accused of attending, and even hosting, some of the lockdown-breaking parties being investigated by police in Downing Street.

Both are expected to be questioned by the Metropolitan Police in London.

This is on top of a Caribbean vacation and the redecoration of the Downing Street apartment funded by wealthy backers, as well as a controversy over the evacuation from Kabul of pets sheltered by a former British soldier who would have priority over people.

“The Mustique holiday, the Downing Street wallpaper, the Afghan hounds, at least one Downing Street party…Carrie Johnson’s name keeps coming up in relation to all of this, sometimes unfairly, sometimes not,” Paul said. Goodman, editor of the influential blog ConservativeHome, noted.

Others have rallied to her defense, including Health Secretary Sajid Javid, who employed her as a special adviser in 2016. He called her treatment unfair, “unworthy” and rooted in sexism.

“I think partners of politicians should be banned,” he said.

However, Cummings claimed she wanted to “get rid” of him as number 10, and alleged that she had tried “to change a whole bunch of different dates”.

Ash Sarker of left-leaning Novara Media acknowledged that some of the criticism was “motivated by misogyny”.

“But she’s also a political operator in her own right… and we don’t have the normal methods of holding her accountable,” she told Sky News.

Born Carrie Symonds, she is the daughter of the co-founder of The Independent newspaper and a former lawyer. She grew up in South West London and attended private school before studying theater and art history at university.

She started working for the Conservatives in 2010, in marketing, and first came into contact with Johnson working on his 2012 re-election campaign for London mayor.

She went on to hold various positions in politics and at Conservative Party headquarters, including director of communications, but left that post in 2018 after a reported dispute over her spending.

She joined the marketing team of conservation group Oceana, before taking up a position at the Aspinall Foundation, an animal protection charity.

The Johnsons reportedly started dating in 2018 when the Prime Minister, now 57, was still married to his second wife.

When he took over from Theresa May in July 2019, Carrie Symonds watched with the staff as he became the first British Prime Minister since Edward Heath in 1970 to take office without a wife by his side.

At first she stayed to live elsewhere.

But the couple announced their engagement in early 2020, once their divorce was finalized, and tied the knot in a “secret ceremony” in May last year.

In between, the couple’s first child together, Boris Johnson’s sixth, was born in April 2020, shortly after he recovered from Covid.

The couple named him Wilfred. A little girl called Romy followed in December.

The Johnsons own a rescue dog, called Dilyn, who is also charged with varying degrees of misbehavior in Downing Street.