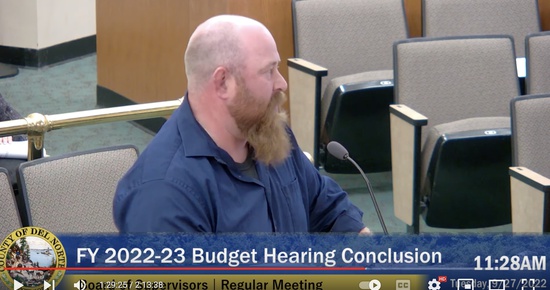 The Board of Supervisors passed the 2022-2023 Del Norte County budget.

But the vote was not unanimous. Although the county held two public workshops last week, elected officials have resumed a debate on transparency.

District 3 Supervisor Chris Howard attempted to brief colleagues Valerie Starkey and Susan Masten on the budget process through Auditor-Comptroller Clinton Schaad. Howard said his colleagues should have asked questions when the draft budget was presented to them in June, criticizing Starkey and Masten for raising concerns at the “11th hour.”

Starkey and Masten said they asked questions in June, but were told “that’s not something we do here.” Although she praised the staff for organizing the workshops, Starkey objected to passing the final budget.

“I just wish this advice would make room for the fact that I don’t do it exactly like you do,” Starkey told Howard. “I see it differently and I think we should all have the ability to process things, to ask for things, the way we see it.”

Tuesday’s meeting concluded a 14-day public hearing allowing residents to request changes, additions and ask questions if they submitted them in writing to county staff.

Auditor-comptroller Clinton Schaad presented a 2022-23 budget to the oversight board that is balanced at around $181 million. The budget had a closing fund balance from fiscal year 2021-22 of approximately $8.5 million that was carried over to the current fiscal year. It also includes a contingency fund of about $550,000 to $650,000 that can be used for “pretty much anything,” Schaad said.

The 2021-22 budget also includes $1.2 million in tax revenue from Measure R in a capital improvement fund that has yet to be allocated, Howard said.

The budget must be passed by Oct. 2, Schaad said.

On June 28, when the Board of Supervisors got its first look at the county’s draft budget, County Administrative Manager Neal Lopez said department heads could speak publicly about the requested items during the public hearing period in september.

At that time, Masten asked if the county would hold public meetings during the public hearing period. Board Chairman Gerry Hemmingsen said, “We have to do this.

During Tuesday’s discussion, Starkey had requested that approximately $100,000 be set aside to help with the transition of the Animal Services Division to the Del Norte County Sheriff’s Office as well as the potential relocation of the department. of farming. She also asked for funds to repair the fences and livestock shelter, repave the animal shelter parking lot and provide a more secure facility.

Starkey argued that these things are necessary and should be included in the budget.

Howard said the county could use its Measure R capital improvement dollars as well as the provident fund to make those repairs.

“We don’t need to go into such minute detail before this hearing, that’s the micromanaging comment I made,” he said, adding that those Measure R dollars could also be used to improve capital assets. “It’s really the job of the department head to bring it to us (to) bless it. They anticipated the needs, and perhaps the shortcomings of the different departments. It has worked well, at least for me, for the past seven years.

Although the Del Norte County Sheriff’s Office was chosen as the new headquarters for the animal services division, Schaad said he hadn’t heard of a plan to relocate the departments until Starkey talked about it last week. He said he didn’t know if $50,000 would be enough to move the agriculture department.

Restructuring the budget to set aside the $100,000 requested by Starkey for restructuring animal services and agriculture could include potentially reducing the contingency fund and earmarking it for that purpose, he said. Using the $1.2 million in Measure R dollars for public infrastructure projects could also be discussed, he said.

The county, Schaad said, is in good financial shape with plenty of one-time funding. Although the budget workshops were informative, the process is year-round.

“There is money in the budget that can be used for projects,” he said.

Board Vice Chairman Darrin Short, who represents District 1, mentioned a meeting he had with the San Benito County administrative officer at a recent conference. This county administrator said he was starting his budget process early in the year and lasting until June. Each department head was given the opportunity to make their statement, Short said.

Short suggested that Del Norte County could adopt a similar practice that gives each department head a chance to tell council what their needs and challenges are in open session so the public can hear as well.

Short also advocated that Measure R’s capital improvement dollars be used to repair livestock shelters and animal sanctuary fencing. He requested that the subject be placed on the Council’s agenda for October 11th.

Hemmingsen said the accusation that the budget process was not transparent sounded like a “slap in the face for me because I’m as transparent as I can be.”

He also didn’t like Starkey’s offer to set aside funds for Animal Services, saying he didn’t know if it would cost $10,000 or $2 million.

“I don’t like going into something without a plan,” Hemmingsen said. “And that’s what that $50,000 means to me. It’s kind of a bombastic gesture – “Look what I’m doing. I’m going to do this and I’m going to make the rest of the board look bad’ – I don’t like it.

Schaad told Hemmingsen he shared his dismay at the accusation that the budget process is not transparent.

“I report to 25,000 voters,” he said. “I am an elected official for the whole department. Part of my job is to watch the money. This talk about not being transparent is a slap in the face.

Starkey apologized, saying she wanted the process to be more transparent and did not intend to criticize any particular colleague.

Masten suggested the oversight board hold budget workshops early next year, as she believed several points had been raised by department heads that her colleagues could consider in the future.

“What I hope and will recommend is that we start early in this process and do the budget hearings in a different way so that the process is open to the public and our participation,” he said. she declared.