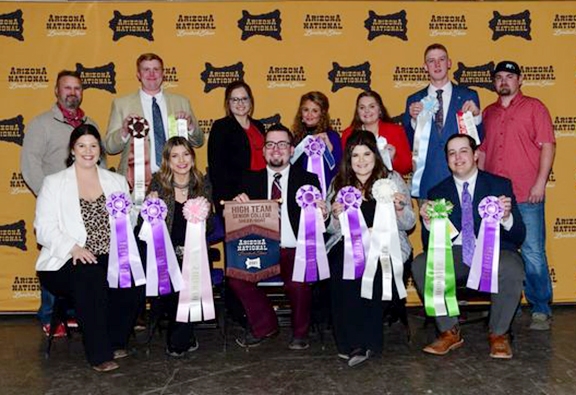 Led by Ryan McDuffie, Kason Cathy and Rylee Simpson, the cattle judging team combined for 26 top-10 finishes in winning the reserve championship at the Arizona National Livestock Show in Phoenix.

The U of A Livestock Judging Team won the reserve championship at the Arizona National Livestock Show in Phoenix during the semester break with five team members placing in the top 10 individually.

The team is made up of animal science students and coached by Professor Bryan Kutz. Team members have combined for 26 individual top 10 finishes.

Individuals judged and placed 12 classes of livestock containing four animals per class with categories for beef cattle, pigs, sheep and goats. After judging and ranking, the team members explained their ranking to the officials, who scored the competitors individually and as a team.

The U of A had the best team score in sheep and goats, and finished second in reasons, cattle and hogs.

The team is housed in the Department of Animal Science at Dale Bumpers College of Agricultural, Food and Life Sciences.

About Dale Bumpers College of Agricultural, Food and Life Sciences: Bumpers College provides life-changing opportunities to position and prepare graduates who will be leaders in businesses associated with food, family, environment, agriculture, sustainability and quality of life. human life; and who will be first-choice candidates for employers looking for leaders, innovators, decision makers and entrepreneurs. The college is named after Dale Bumpers, a former governor of Arkansas and longtime U.S. senator who propelled the state into national and international agriculture. For more information about Bumpers College, visit our website and follow us on Twitter at @BumpersCollege and Instagram at BumpersCollege.

About the University of Arkansas: As Arkansas’ flagship institution, the U of A offers an internationally competitive education in more than 200 academic programs. Founded in 1871, the U of A contributes more than $2.2 billion to the Arkansas economy through teaching new knowledge and skills, entrepreneurship and employment development, discovery through research and creative activity while providing training in professional disciplines. The Carnegie Foundation ranks the U of A among the top 3% of colleges and universities in the United States with the highest level of research activity. US News and World Report ranks the U of A among the top public universities in the nation. Learn how the U of A is working to build a better world at Arkansas Research News.