UK equities: ‘It’s not the price of oil we’re watching’ 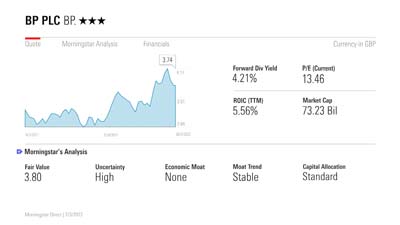 Ollie Smith: The rotation in value has given UK equities a boost in recent weeks. But that being said, the conflict in Ukraine has certainly clipped the wings of anyone who was too ambitious. This is therefore an ideal time to discuss UK equity funds with the manager of JO Hambro’s UK equity offering. Clive Beagles joins me now. Clive, thank you very much.

Let’s start with oil, because BP is the biggest holding in your fund. How does it feel to be an oil fund manager right now? Did you make any changes? What do you observe?

Clive Beagle: Yeah. Look, clearly, this has been on people’s minds. Of course, there’s a lot of focus on BP and it’s kind of 20% ownership of Rosneft and the fact that they’ve effectively moved away from that. But of course, BP’s involvement in Russian oil is not unique to them. Other companies have kind of followed suit – Shell, Total and I suspect most of the US majors will as well. So while it might have been slightly larger for BP, it’s not a unique situation for them. And to put some context, the lost dividend stream that BP got from Rosneft is probably about $6 or $7 on the price of oil. I mean obviously the price of oil probably went up $20 to $25 during this phase. So on a net-to-net basis, they are making more money even though they have moved away from their Rosneft operation.

Clearly, this is a situation that remains quite fluid. But don’t lose context. Why do we love BP? Because certainly UK names and in an international context it’s best placed to benefit from the energy transition because of the rapid acceleration they’re putting into solar, wind, electric vehicles, mobility and such, and none of that really changes. None of us know exactly how long oil prices will stay this high, but you have to assume that long-term supply has come down here, as Russia will struggle to get back into the market like it was before, which, all things being equal, means the price is going to stay higher for longer, and if it helps BP accelerate its transition to low-carbon energy, so much the better in some ways.

SE: Agreed. With regard to UK equities in general, do you feel in any way vindicated by events given that the UK had looked relatively unattractive for some time? I’m just thinking specifically about selling technology and how that hit early in the year. Is it a return?

CC: It’s a little early to feel vindicated. I think this is the start of a process. A bit of context. The UK has really underperformed since the Brexit referendum. So what is it ? Summer 2016. Over the last three or four years, it’s been kind of a growth outperformance when you’re talking about big tech in the US, for example, versus value. The UK, of course, has a penchant for value as a style. And I think we sincerely believe that we’re putting Ukraine aside for a while, I think there’s a regime change going on here. Monetary policy has been too accommodative for too long. Interest rates must rise. And ultimately, not only will that lead to a kind of, we think, kind of a recalibration of the relative outlook of some kind of growth stocks versus – fair growth stocks, of course, were all valued at lower discount rates than the rest of it.

But in fact, of course, many stocks in the UK in that value basket are actually benefiting from rising interest rates, especially the financial complex, especially the banks but also the insurance companies. So I think this process has only just begun, to be honest with you. We have a whole generation of investors who have never seen an environment where interest rates are rising instead of falling or staying at very low levels. That’s a significant difference, and I think in that context the UK has many years of relative recovery ahead of it, I think.

SE: Interesting. Agreed. The situation of the last two weeks has led to a sort of new focus on risk. So, I want to ask you what risks are you monitoring in the portfolio and perhaps what lessons can everyday investors in you learn from this?

CC: Yeah. There are a lot of intraday moves or even daily moves; it doesn’t take much to move markets or even individual stocks, or even bond markets. I mean, earlier this week we had the biggest – kind of a six standard deviation move in the bond market. And guess what? The next day, bond yields almost rebounded to where they were the day before. And it’s supposed to be the largest and most liquid market in the world. So don’t dwell on it too much.

For me, in fact, the biggest risk – and this is sort of related to the fallout from Ukraine – to my previous point, central bankers have been lagging in the last 12 months. Obviously, the policy was very flexible. We weren’t quite sure how the pandemic would unfold. Economic growth has picked up much faster than any commentator expected, and they really should have raised interest rates last year. So the biggest risk to me is that they stay behind the curve and maybe use the current conflict as some kind of another excuse to kick the streets and not raise rates when they should . Rates should be 200 basis points higher than they are. I’m not saying they should do it immediately, but that’s the kind of context we’re talking about.

Now, in that regard, I’m quite encouraged by Governor Powell’s comments yesterday, who effectively said, “Look, you know, we still have to raise rates.” And of course, you could say that the short-term inflation agenda got worse because of where energy prices saw another spike. So that’s the risk we don’t need – because if central bankers stay behind the curve, they will obviously have to take more corrective action later, which could lead to a global contraction later on. So for me, that’s the risk I focus on the most, which might surprise people. They may assume it’s following minute-by-minute news from Ukraine and I don’t think that’s the case. I think the big issue facing investors right now is monetary policy tightening and its appropriate pace.

SE: Agreed. To learn more about investing styles and conviction investing, visit Morningstar.co.uk. Until next time, thanks to Clive. I was Ollie Smith for Morningstar.